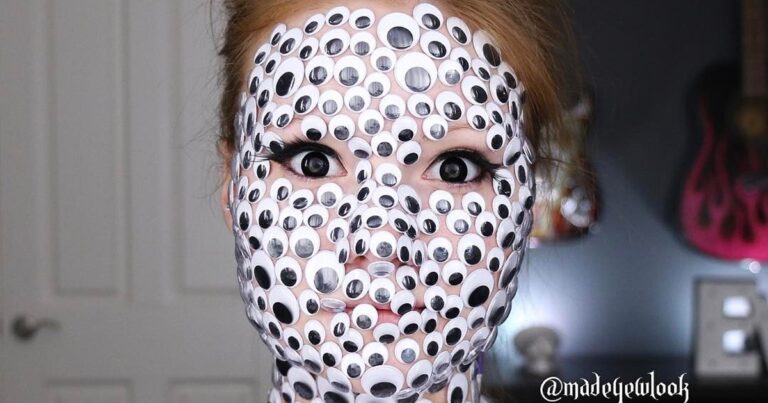 Googly eyes have fascinated people for quite some time. Despite being harmless, they can often be unsettling for some people to look at. On the flip side, however, they can be a soothing sight for others. Regardless, there’s something a bit interesting about seeing how many can fit on a person’s body. This is what body painter and makeup artist Alexys Fleming decided to do.

Being self-taught, Fleming has spent quite a considerable amount of time learning her skills. While she’s put these on show in a variety of ways, putting the eyes all over herself may be one of the most amusing. She took to Instagram and YouTube to document the process, as well as to show off the end result.

The entire thing went much better than many people may have thought. While the eyes still give off a somewhat creepy vibe, the process is quite interesting. There’s also something hypnotic about someone being covered in googly eyes. In a time-lapse video, which lasts almost five and a half minutes, Alexys Fleming takes viewers through how much effort is involved in the process.

Though there are some areas that she wasn’t able to cover – around her ears, for example – the body painter and makeup artist covers almost every other inch of her upper torso and face with them. While the process looks like it takes a lot of effort, it also looks like a lot of fun.

While the end result is hypnotic, the application process is just as hypnotic. However, a lot of this could have something to do with the time-lapse aspect of it. As fun as googly eyes can be by themselves, having dozens of them certainly brings it up a notch. You can check out Alexys Fleming’s video on applying the eyes above. However, it’s unclear if she used extra glue when applying them.