Freaked DISCOVER THE ART OF PUBLISHING
Home Animals An Iguana Is A Cat’s Favorite Thing To Scratch Itself With. He Has Another Unusual Friend Too 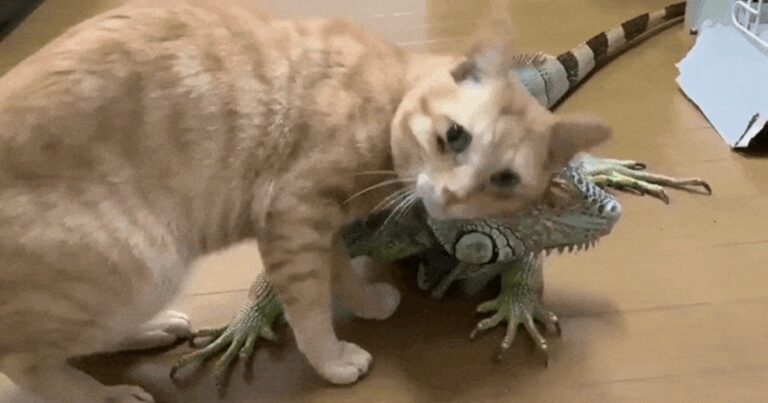 The animal kingdom is full of animals that are relatively friendly toward each other. However, this is taken to the extreme with more domesticated animals. While there are some that still have some kind of intrinsic hatred for each other, like cats and dogs, others are a lot more affectionate. One of the more adorable of these instances comes in the form of a cat and an iguana.

Igu Senpai, a Japanese iguana, lives with quite a broad range of animals, including dogs, snakes, birds, and even some tortoises. However, it’s his friendship with the housecat that’s starting to take the Twitterverse by story. The main reason for this is that the cat likes to scratch himself off of Igu Senpai, with a lot of this focusing around the cat’s head.

It looks as though Igu’s scales provide the perfect way to scratch a cat’s head. Many people shouldn’t be surprised that the two are actually quite good friends and have been known to cuddle with each other when sleeping. This doesn’t mean that the pair don’t get along with the other animals in the residence, however.

In contrast, Igu Senpai seems to get along great with some of the birds in the house. This is especially true with a blue parakeet that likes to rest on his head. Based on how comfortable the bird looks, and the fact that Igu doesn’t seem to mind, it appears as though all of the animals get along swimmingly.

Based on the iguana owner’s Twitter page, it looks as though the reptile is comfortable with pretty much every other animal in the house. As a result, there are quite a few friendships formed that might surprise even the most devoted animal lovers. Regardless of how strange they are, it’s hard to ignore how adorable it is.