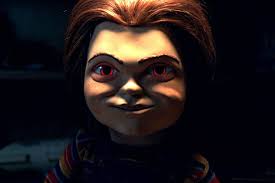 As my friend and I walked into the cinema to catch the new Child’s Play reboot a few months back, my companion took one look at the films on offer and said “The last time I saw that many ‘toys’ in one place it was in a very specialised shop.”

Obviously, the manner of plaything he was referring to was probably not likely to pop up in a Disney Pixar production (I’ll leave you to make the obligatory  ‘Buzz’ and ‘Woody’ jokes for yourselves) but he did have a point.

With Anabelle Comes Home, Toy Story 4  and the aforementioned Chucky rehash all on the bill, there did seem to be an awful lot of big screen toys to choose from that weekend. Clearly Hollywood’s preoccupation with our childhood friends was a strong as ever.

Unfortunately, so too was its obsession with remaking previously successful movies, bolstered by the misguided notion that because our ability to create convincing effects has improved, applying those skills to an old idea will improve it immensely. ‘Better CGI’ + ‘Effects reliant film from the past’ = a classic, right? Turns out, no.

Whilst I am usually tempted to think of horror classics in the same way I do choir boys – much better without some idiot interfering with them – when rumours of this particular reboot started to circulate I decided, tentatively, that I would give it the benefit of the doubt and go in with an open mind, I had my reasons for this.

Firstly, as one of a handful of horror film creations that have truly crossed the divide from genre specific character to a mainstream cultural icon, it could definitely be argued that Chucky was due an update. Particularly, if it finally succeeded in erasing all memory of the terrible and numerous sequels.

Secondly, there was a good deal of buzz around the choice of Mark Hamil as the voice of Chucky, with fans of his voiceover work as The Joker enthusiastic to see how he leant his tones to cinema’s most famous demonic doll. For these reasons I reserved judgement until I’d seen the film. Now though, I have seen it. Let the Judgement commence…

Rather than the ‘five star’ rating system favoured by many, I tend to review horror by trying to give a ‘five word’ rating. Providing alongside a more in depth analysis, a pithy and condensed overview that will give any reader or curious questioner a direct and ‘at a glance’ summation of my feelings about the film’s merits (or lack of).

For example for The Exorcist I might write ‘Best. Horror. Movie.Ever. Made’ or for The Blair Witch Project ‘Unnerving, unsettling, genre starting classic.’ and for the remake of Child’s Play – ‘What a crock of s***’. Here’s why.

For a kick off, despite its nods to the original and easter egg references to other movies (Robo-cop and Star Wars references anyone?) the obvious affection for movies of the past is offset by the flick’s self loathing desire to remove any hoaky ‘supernatural’ element from the film.

So whilst on the one hand it ladels out  references to old school horror fare like The Texas Chainsaw Massacre, Killer Klowns and even the Leprechaun series with all the subtlety of a spade to the face, it self consciously refuses to become the sort of film it tips its hat to.

In the 1988  original, serial killer Charles Lee Ray passes his wicked soul into a Good Guy doll using some pseudo voodoo mumbo jumbo, explaining in one action why the possessed plaything has such a deliciously demonic homicidal bent and why attempts to kill the damn thing fail so miserably.

In the remake, this element is removed entirely, replaced instead with a half baked Black Mirror style ‘technology gone wrong’ narrative in which ultimate responsibility for Chucky’s rampage is transferred from a notorious serial killer to an angry Vietnamese factory worker who simply toys (see what I did there?) with the doll’s settings.

The problem with turning the world’s most famous possessed doll into a second rate Twilight Zone remake, is that it removes the inherent malice from Chucky’s intentions. His acts of violence become less expressions of disturbing evil and are instead misguided expressions of his love for his ‘buddy’.

The result is a Terminator 2-esque scenario in which a youngster tries to explain to what is essentially a piece of technology, the immorality of killing, even to eliminate a threat.

This amelioration of Chucky’s motives is aided by a storyline in which many of those on receiving end of his actions are characterised as deserving victims. From the pervy maintenance man to the philandering ‘wicked step father’ character, the early victims gruesome deaths are played as the kind of retribution tales you’d expect to find in an episode of Tales from The Crypt and serve to give Chucky a sympathetic side he really didn’t need.

There is more than enough icky flesh tearing to please the gore hounds out there, but the context in which the  splatter is presented makes it more laughably exaggerated than genuinely affecting.

What is affecting is the scriptwriter’s attempts to hammer home catchphrases and whilst Hamil does a predictably stellar job of making Chucky sound creepily earnest, at times you get the feeling that the film is throwing every catchphrase it can at the audience in an attempt to make one stick.

In reality, all this does is make Chucky’s dialogue seem repetitive and stilted like a monkey playing with a soundboard. This means that despite the fact that the doll isn’t possessed in this version, it still seems like it, as you can almost feel the spirit of the producers within the doll already thinking about the poster for the sequel and trying to choose a tagline by throwing out a multitude to see which one fits.

One thing that didn’t fit with me was the doll’s ‘new and improved’ appearance. Whilst I acknowledge that  this might be a matter of personal preference, for me the image of the new Chucky is simply far too individualised and inherently deformed to be impactful.

Part of what made the original design so disturbing  was the doll’s familiarity. By looking like a slightly exaggerated  cross between a cabbage patch and tiny tears doll the 1988 version retained the appearance of something you might legitimately find on the shelves or at the end of the bed. In attempting to make this version disturbingly lifelike (and very reminiscent of the doll from the Robert the Doll movie) the designers fail to capture what made Chucky so disturbing in the first place.

The supporting cast of actors do a stellar job in the film despite the limitations of the script. Of particular note are the young actors who still manage to inject humour despite being lumbered with a thrown together vision of ‘yoofs’ that feels like it was dreamt up in a boardroom by people who have not only never met an actual teenager but also skipped that portion of their own lives entirely, going straight from the cradle to a business suit in one fell swoop.

Reading over reviews of the original Child’s Play it is striking how many critics at the time described the movie as ‘clever’. The same word can be applied to the 2019 version, however in this case it is a film that ‘thinks’ it’s clever and tries way too hard to be knowing and post modern at the expense of decent storytelling and genuine scares.

The constant nods to E.T. only serve to make the viewer want to ‘go home’ half way through the film and the scariest thing about the whole experience is the prospect of any sequels. The cleverest thing the viewer could do is watch something else, perhaps even the original.Now there’s a thought, I wonder if any other toy movies came out this year?