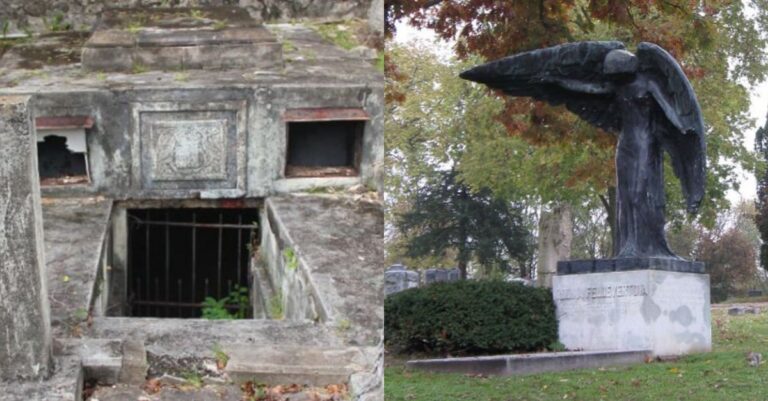 Graves may appear ordinary on the outside, but truth be told every grave holds a deeper darker story within. Whether father, brother, mother or daughter, the headstones always speak volumes about the tales of those within. The following are 6 of the most mysterious graves from around the world.

The Grave in the Middle of the Road

Nancy Barnett’s relatives did not want her grave to be disturbed in any way and hence County Road 400 in Indiana was built along an odd detour simply to come around her resting place. A tense standoff ensued between the county and her relatives but eventually the road was made to split on either sides of her grave. Mysteriously enough however, when the grave was exhumed by archaeologists, 6 people’s remains were found. Two women (presumably one of whom was Nancy Barnett), four children and a man. The identities and origins of the other people are still unknown.

The Grave in the Parking Lot

In 1828, Mary Ellis was buried on wooded hillside on the Ellis family plot which overlooked the Raritan River in New Brunswick, New Jersey. She had apparently fallen in love with a sea captain who promised to return and marry her.  But, he never came back. Heart broken and forever lonely when Mary Ellis passed away she was buried in the spot she and her lover were supposed to reunite.

Now, almost 200 years later, her grave still stand there. The surrounding area has been turned into a parking lot. The grave now stands on top of a seven-foot-high pedestal, surrounded by a chain link fence, in the middle of the lot.

The Moving Caskets of the Chase Vault

In Barbados in 1812, the Chase family vault was opened for the burial of Thomas Chase. Already in the vault were the bodies of three of his female relatives. Afterwards, the vault was sealed with concrete and left undisturbed. However, upon being reopened to lay Thomas Chase to rest, the coffins were “in a confused state, having been apparently tossed from their places.” A while later the vault was reopened to bury an infant and the same phenomenon was witnessed.

In 1820, the coffins were finally removed from the vault and buried elsewhere. Ever since the vault has remained untenanted and unsealed and untenanted.

The Black Angel of Oakland Cemetery

In Iowa City’s Oakland Cemetery, the statue of a striking Black Angel stands. The Black Angel is fabled to possess the power to kill anyone that kisses or even touches it. The history of the Black Angel is rather intriguing. The bronze statue is said to have turned black overnight from a lightning bolt that struck it. It is said to be a mark of its owner’s infidelity.

In Griswold, Connecticut, in the old Jewett City Cemetery a large number of nondescript tombstones can be found dating from the 1840s to 1850s. The tombstones are of Henry Ray and his three adult sons who all passed away due to a mysterious illness within a few years. Although now believed to have been tuberculosis, at the time it was largely presumed to have been the work of vampires. Two bodies were even exhumed and burned. The family is now known as the Jewett City Vampires.

Victim of the Beast

In Salt Lake City, Utah, Lilly E. Gray’s grave’s headstone holds a mysterious inscription. Right beneath the name and her date of birth and death, the words “Victim of the Beast 666” are written. No one knows the true story behind this inscription. The very graveyard is full of other sinister tales including the legend of “Emo’s Grave.” The resting place is that of a child molester or serial killer and he can be summoned if visitors walk around the grave thrice.

Some people believe that when bodies are laid to rest, they remain so forever. Apparently not. From coffins moving around to bodies that can be summoned from the grave, there is far more to the world of the dead than we know of.