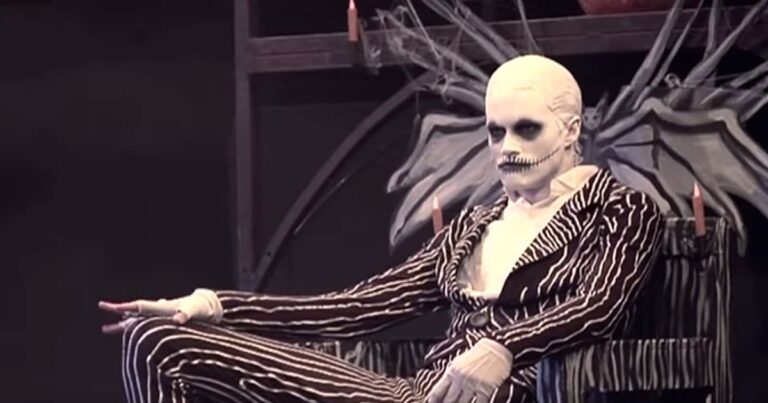 The majority of Tim Burton fans loved A Nightmare Before Christmas and continue to do so. However, one thing that many have always wanted to do has been to see a live-action version of the film. Though this doesn’t look like it will come to the big screen, it has become a hit on the theater circuit over the past few decades.

Given time, good and bad versions of any film are going to be released, provided they get enough adaptions. While there might be some that wouldn’t please some of the movie’s fans, there is one in particular that might. In this one, part of which you can see below, Jack Skellington is portrayed by Matthew Patrick Davis.

Davis is perhaps best known for his YouTube work, alongside a lot of theater work. On his YouTube account, he’s brought the character to life and made the role his own while still remaining relatively faithful to A Nightmare Before Christmas. In addition, he manages to pull off Danny Elfman written songs perfectly.

Perhaps the most notable of these is Jack’s Lament, where Davis really shows off his chops. Filmed in a black box theater, the songs have quite an eerie quality, especially given that the sets are quite asymmetrical. While this would be odd for the majority of films, it’s oddly fitting for what it is.

With how great the theater production looks, it could lead many fans to wonder why Disney, who owns the rights to the film, hasn’t made a more theatrical version of it. It’s one of the older movies that they own that could be adapted into a Broadway musical relatively easily. Davis’ version of Jack Skellington, as well as the rest of the Nightmare Before Christmas cast on the production, only helps to highlight that fact.