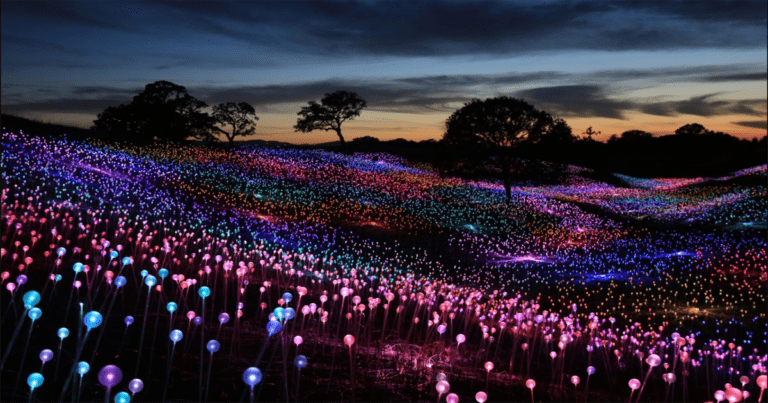 There are very few things that can say they literally brighten up the night’s sky. However, the Field of Light at Sensorio in California may be one of the rare things that could. From a certain distance, it looks light a field of especially bright wildflowers, especially during the daytime. Once darkness starts to set, though, onlookers soon realize that these aren’t wildflowers at all.

Instead, all of the ‘flowers’ are made up of LED lights. These are wrapped together in small bouquets to make various color combinations. Planted in Paso Robles, this is the largest work by artist Bruce Munro. According to the creator, there are 58,800 stemmed spheres that happen to be fiber optic and completely solar-powered.

To put that into perspective, the 58,000 spheres cover 15-acres of land. Reviews and reports by people who have already visited the Field of Light at Sensorio have said that it’s art that you feel rather than view. They suggest that the installation brings you into the art because viewers are literally inside it.

As such, it can offer a much greater appreciation and understanding of the piece itself, making it feel much more ethereal. The installation launched on June 12 and looks set to stay open until the end of June 2021. This should give people enough time to book themselves flights to get over and see it.

Naturally, there are some safety restrictions put in place because of current events, although these should ease over the next few months. Some of the more notable restrictions include having a timed ticket that must be bought offsite, alongside one-way paths and limiting groups to a maximum of six people.

Despite this, these shouldn’t take away from the overall beauty of the Field of Light at Sensorio. In contrast, having fewer people there might make it that much more beautiful.