Freaked DISCOVER THE ART OF PUBLISHING
Home Horror News Why was H.P Lovecraft such an important figure in horror? 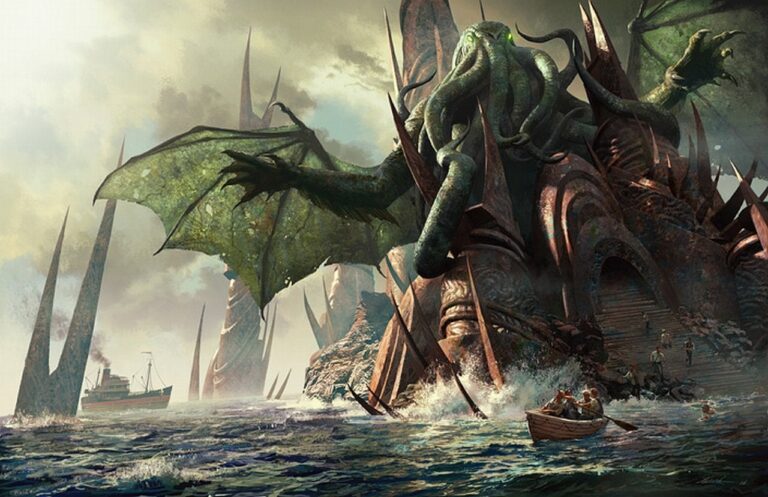 Howard Phillips Lovecraft, a famous American author who lived in the early 20th century and died in poverty. A man of extremely controversial convictions to say the least and one of the most influential horror writers of all time.

His novels have had a tremendous impact on a huge chunk of the genre, literature as well as cinematography and video games. It’s not only the weird and disturbing monster designs where the Lovecraftian style truly shines. It’s also the deeply psychological, even philosophical approach that makes his work so unique and appealing.

Lovecraft is known as the father of cosmic horror at that time a new category in the horror genre, it emphasises the insignificance of humankind in the cold and fundamentally alien universe. According to Lovecraft, humanity is but a tiny ignorant substance in space and there is a myriad of other beings far more powerful and ancient.

Some of these beings are so monumental and supreme that their very existence goes far beyond our comprehension. Cthulhu is undeniably the most popular of the Lovecraftian creatures is one of these God like entities. Thankfully the majority of us and by us I mean people have no idea they even exist.

Very few have ever had a chance to discover them and these discoveries have always ended badly, not because these great old ones hate humans and want to see them dead. In fact there is absolutely no indication that they even have feelings, desires or motivations. It might very well be that they actually transcend all that is relatable a natural to humankind. Overall that is a truly fresh and thought provoking way of telling us that we are not as important as we like to believe!

Lovecraft’s approach to the genre was strikingly unique for his time, before him it was mostly Gothic horror, ghosts, vampires, medieval castles and ancient curses. As well as emphasis on people. Lovecraft found the latter especially repulsive. To him humans were not worthy to be the centre of the story again, because of their absolute insignificance on a larger scale of things. His novels almost never had a happy ending. Most of his characters would perish or go completely insane and then perish upon discovering themselves. Our minds simply don’t have the capacity to handle this terrible truth, So it would eventually destroyed itself.

Lovecraft’s ideas resonated with a few people who agreed to publish his novels. Sadly they didn’t make him popular or rich during his time though, his fame actually came after his death. When his followers took interest in the universe and not only kept it alive but also added to it. One of them was August Derleth who is believed to categorise the Cthulhu mythos, a pantheon of Lovecraftian characters settings and themes. Throughout the years the mythos has evolved and expanded thanks to the contribution of many other writers. The idea of putting humanity against unfathomably alien merciless entities has ended up being quite popular. Various films, books, board and video games have picked up on themes and ideas. Often none explicitly and if you think about it the Cthulhu mythos are perfect for adaptation in different media.

Lovecraft created a vast world with a sense of place but he left a lot of imagination and interpretation, his vague approach to the details and descriptions gave a lot of freedom to the artists who wanted to incorporate his ideas.

So there you have it! Unique ideas, fascinating universe and faithful followers is what kept Lovecraftian horrors alive long after the death of its creator!