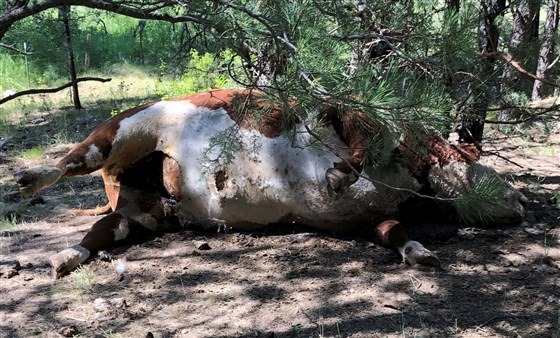 The discovery of the five slaughtered bulls, all with their tongues and genitalia missing and blood drained has prompted investigators to consider occult rituals as a motive for the killings.

The cattle, which were killed on a ranch in Oregon and which were said to previously have been healthy, were found in a ravine, drained of blood and missing the organs mentioned above. The lack of predator tracks around the bodies has lead some to suggest that they were killed and mutilated deliberately.

Several theories as to how and why the mutilations may have occurred have been proposed, ranging from the work of carrion beetles eating the tissue, to deliberate human cruelty to harm the ranchers pockets, and even alien interference.

However, Vice President of the ranch Colby Marshall has gone on record to state that believes a cult is responsible for the mutilations.

Similar cases of cattle being found with genitals missing and other mutilations occurred in the 1970s in the Midwest of U.S. with some cases also recorded in the 1980s in Oregon.

One theory to explain the appearance of the bulls is pooling, in which the blood of the dead animal collects at the bottom of the body leading some of the softer organs to decompose more quickly. This however, does not account for the number of animals found or the striking similarity of their apparent mutilations.

Sheriff’s deputy Dan Jenkins made his theory clear saying that he “would lean more toward the occult, where people for whatever reason — whether it’s a phase of the moon or whatever rituals they’re going to do with their beliefs — are coming to different areas and doing that”.

There is a total of $26,000 dollars available in rewards for anyone with information.