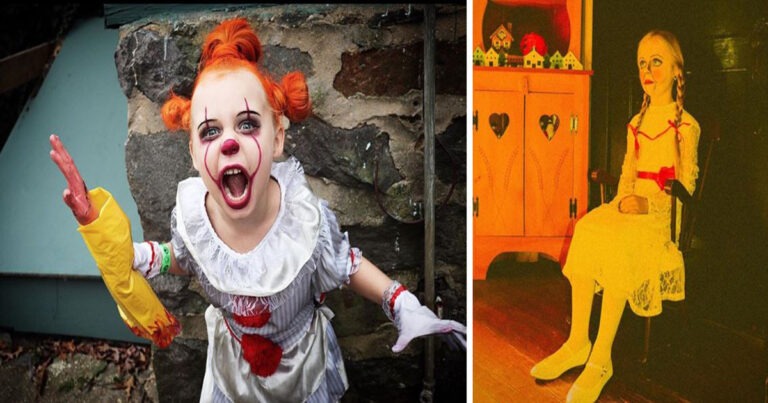 It certainly seems that cosplayers are getting younger and younger nowadays as the cosplaying scene gets more and more popular, and six-year-old Coral DeGraves aka Kid Dreadful is definitely representing the horror genre.

From Annabelle to It, Kid Dreadful has a growing library of characters which she has portrayed, and with the full support of proud mother Cheyenne DeGraves, they apparently are keen to add more. In an interview with iHorror DeGraves states that we will “see some more well-known horror icons popping up within the next few months”.

Degraves said that her daughter got started with cosplaying in 2014 when she attended the Monster Mania convention in Philadelphia dressed as Cujo before quickly moving on to other iconic figures such as the murderous Child’s Play antagonist Chucky.

When it came to concerns about what kind of movies and TV shows Kid Dreadful was being subjected to, DeGraves quickly explained that they “allow Coral to watch clips of some of the characters she dresses as and explain that some of these characters are not ‘good guys’” before going on to say “She has seen small appropriate clips and that is all”. This may come as a relief to some, especially as Kid Dreadful is seen as portraying figures such as Captain Spaulding and Otis Driftwood from The Devils Rejects.

Kid Dreadful has also done cosplay of characters such as Stranger Things’ Eleven.

With a lot of hopefulness moving forward, Cheyenne DeGraves has said that the feedback from the cosplaying and horror communities alike has been mostly positive, and that time permitting they are going to try to do a new costume every day this October.

What do you think about this new cosplaying up-and-comer? Should children be involved in cosplaying at this level at such a young age? Let us know your thoughts in the comments.