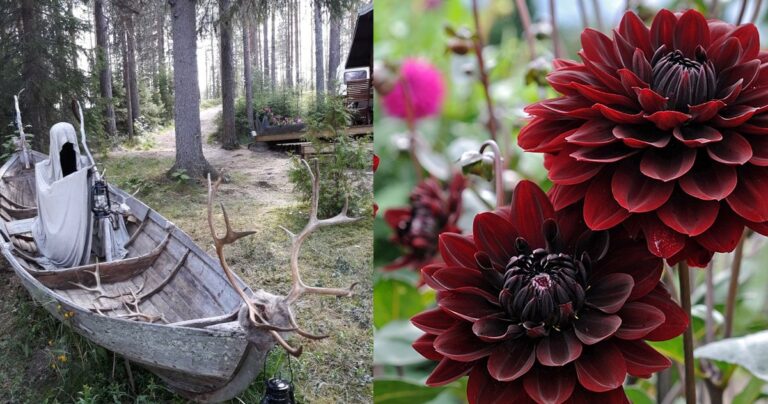 A lot of us have thought about creating a gothic garden, though few of us know where to start. While there may be some obvious tips, such as staying dark with color choices, there are other tricks that might not be as obvious.

However, that doesn’t mean that you shouldn’t be able to design the garden you want. Instead, there are a few things that you could consider and take inspiration from. While you could just transplant specific flowers into your garden, some might take a little bit of additional effort.

Once done, though, everything should pay off in a spectacularly gothic way.

Hanna Pilve’s Instagram account could provide quite a lot of inspiration. Not only are her statues creepy, but they also lend a touch of gothic class to her garden. Featuring hooded figures in a variety of poses, there’s a certain chill factor that’s impossible to ignore.

Many of the statues take inspiration from the Ring, as well as just a touch from The Lord of the Rings. Add in the right lighting, and you’ve got a nice centerpiece to your goth garden.

Flowers For Your Gothic Garden

The flowers you end up using will have a large impact on how your garden looks once they bloom. While you’ll typically expect black flowers, they don’t have to be. Instead, you could try the Dahlia flower. Though this can come in black, it’s also available in a deep red, which brings a little bit of flavor to a lawn.

Naturally, there are also the likes of black bulbs, which includes Calla Lily, Iris, and a range of other options. When it comes to gothic plants, there’s a wealth of possibilities.

Add In Some Witchcraft

Witchcraft brings any gothic outing to a whole new level. Why shouldn’t this apply to gothic gardens? You might already associate specific flowers with goth life, but there is a variety of them tied to witchcraft, thanks to some historical events.

While these might be a different color than the flowers mentioned above, they can still add a nice touch to the garden. Some of the more notable examples include dandelions, blackberries, and willows.

Though many of us want our garden to be neatly disorganized, you could try letting some of the plants wither. While this might mean having to replace them occasionally, a small number of withered flowers could bring your gothic garden to a whole new level.

Naturally, you’ll have to take a great deal of care to make sure this is done properly, but it will be worth your time in the long-term.

Just because you’re designing a gothic garden doesn’t mean you can’t keep it healthy. In contrast, there are a few black vegetables that you can plant. The kicker? There are 13 that stand out from the rest, which could add somewhat of an additional creepy factor.

While most of these are off-shoots of more well-known vegetables, it doesn’t make them any less cool. Some of the more common of these include black nebula carrots, black beauty tomatoes, and maiz Morado black corn.

If you’re looking for something a little different, however, you could also try purple tepee beans and black magic kale. Who says that having a goth garden can’t be healthy?

Regardless of whether you try all of the above or just a few, you should have no problem designing a gothic garden in no time. Though some of the above will take time to grow, this should be well worth the effort.