Freaked DISCOVER THE ART OF PUBLISHING
Home Animals 10 Weird Facts About Crows, That You Didn’t Know 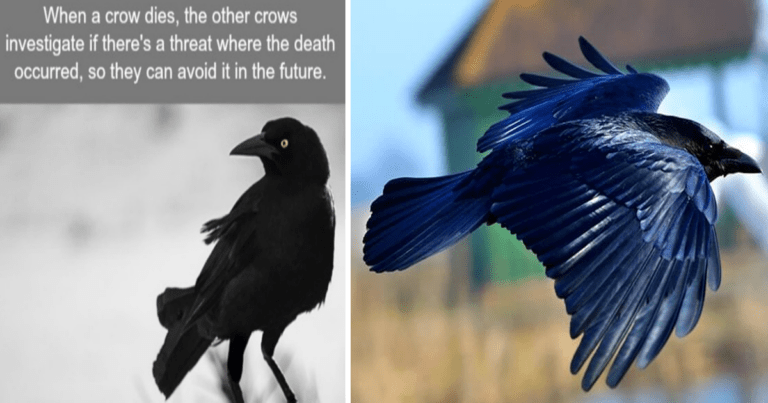 Crows are one of the more interesting small birds on the planet. However, there is quite a broad range of things that most people don’t seem to know about the birds. Some are quite interesting.

A Murder Of Crows

It’s quite well-known that a group of crows is called a ‘murder,’ although few people know why. There are a few reasons for this. Many of these go back to mysticism, among others, the name dates back to old English times when most groups of animals had colorful and poetic names.

When thinking about the birds, the vast majority of people picture them in a cemetery. As much as this may be true, few people know why they congregate there. The most plausible reason is because of it being an open area with tall trees and almost no predators. It’s is also said that as the grounds are well kept they like the short grass to forest for insects and seeds.

They May Eat People

Crows, alongside the similar-looking ravens, typically tend to eat worms, other insects, and pretty much anything they can find. However, that doesn’t mean that they won’t eat meat. In contrast, there are several reports of the birds eating human flesh, during wars ravens would wait for the battlefield to calm and then eat the human flesh of dead soldiers.

A Little Too Intelligent

The birds are much more intelligent than people might imagine. For example, they’ve been known to make and use tools while also having excellent problem-solving skills.

Crows Will Eat Anything

While many people might already be grossed out by the fact that crows can eat people, it turns out that they’ll eat almost anything. From some reports, it seems as though they don’t have too many preferences.

The birds are excellent imitators. In fact, they’ve been known to imitate human speech on numerous occasions.

This crow in Yorkshire England, Asks “Are you alright love?”

Crows seem to be much more fascinated by us than we are of them. In fact, they’re well-known to be keeping an eye on people almost constantly. It’s said that they can remember human faces and decide whether you are good or bad and then will communicate this with other crows. If they decide they don’t like you they could then target you for years to come. It’s not just humans either, they have been known to attack dogs too. If they feel threatened or decide they don’t like you they will dive-bomb and attack.

With some of the facts above, people probably shouldn’t be surprised by the fact that, when kept in captivity, they give their owners names. This can be identified by a unique sound that they only ever make around their owner.

This is something that very few people would believe. However, the birds are known to congregate around their dead in a similar fashion to a funeral. It’s thought that they do this to learn that the place and the responsible party is dangerous so that they don’t make the same mistake themselves.

Murder In A Murder

While there is a wealth of possible reasons for the name ‘murder’ of crows, one stands out. According to reports, the birds could try to and sometimes succeed in killing another crow. The reason they do this is thought to eliminate a weak or sick crow that could be targeted and could put the rest of the group at risk.

So there you have it, crows and ravens are incredible birds that don’t get the credit that they deserve. Let us know your thoughts in the comments and any interesting facts that you may know about the birds.