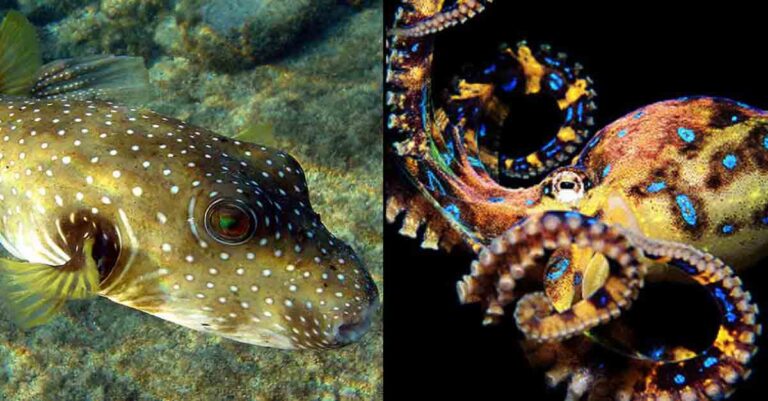 How many times have you come across an animal and were overwhelmed with love and adoration for the cute fuzzy thing? Not so fast, cowboy, a lot of these ultra-adorable animals are deadly predators. Part of their appeal is the fact that you cannot peel your eyes away from them. On this list of adorable deadly animals, you will find yourself star struck and unable to run away. Whether it is out of fear or adoration, you are soon to find out.

Dolphins are safe to be around, right? Wrong. Agile, elegant and intelligent, these majestic creatures have their fair share of horror. They are known to kill other animals for the fun of it. Aside from reports arising of these adorable deadly animals harassing swimmers and visitors, they are also known to kill sharks. A blow to the stomach or gills of a shark by one of these animals is enough to end their life.

Dogs are fluffy creatures that easily make up mans best friend. Dingoes resemble dogs but are far more vicious and deadly. There has been an occasion where a dingo stole a baby. In the wild, these creatures are known to bite and attack humans. Frisky yet adorably deadly, it is best to steer clear of dingoes at all times.

Not that most people regard mice as cute, but instance of people taking them in as pets are not uncommon. Mice tend to be carriers of the hantavirus. This particular form of virus is deadly to human beings and it causes the Hantavirus Pulmonary Syndrome. Want to find out how to contract this horrifying disease? Mice droppings. The virus is passed out in the mice stool and you can easily fall privy to the disease.

I always knew all forms of cats were evil. These gods of the internet are the oddest form of adorable deadly animals. They carry the Toxoplasmosis infection which can be passed out in their stool and transmitted to humans. The infection is lethal for humans and even causes problems for pregnant women. In some cases, women experience miscarriages because of it. Time to rid the world of cats.

Mostly likened to an old grandma, this kindly looking fish is nothing but completely lethal. The derpy face is accompanied by a body covered in spikes, loaded with tetrodotoxin. Its goofy visage can easily fool humans into thinking that it is completely harmless. The puffer fish injects its toxins into the bodies of whomever comes close to it. And it is enough to kill.

This gorgeously colored frog is a bright gold yellow in color. If you werent too careful you could mistake them for chunks of gold. These adorable deadly animals are covered in poison, enough to kill not one but 10 grown men. Still think they are cute?

A duck billed platypus is not the most popular of animals when it comes to appearances. However, it is still regarded as one of the many adorable deadly animals to dwell on this earth. Male platypuses have ankle spurs which secrete venom. It is potent enough to kill small animals. In the case of humans, the poison is painful to a degree that you would wish you were dead.

Ever suffered an anaphylactic shock? You better hope you do not. The slow loris is fabled to secrete a venom from its glands that can throw you into an instant shock. These insanely adorable deadly animals also bite and attack. It is in everyones best interests to not let the large beseeching eyes fool you.

If you think octopuses are ugly creatures then you probably have not laid eyes on the blue ringed octopus. These stunning creature grow only up to 5-8 inches in size. Their venom is powerful enough to outright kill a grown man. The worst part is that there is no anti venom that can combat their poison. If you get stung then prepare to experience nausea, heart failure, repiratory arrest, blindness and paralysis altogether. Eventually you will end up dead.

These adorable deadly animals are not ones you want to cross paths with. Some of these are unreal, who would have thought kittens could kill? It seems like the more you know the more you feel like never leaving your house. Disturbingly enough, most of these animals are considered tame and suitable for human interaction. From dolphins to mice, you can never really gauge the terrible power that lies in the hands of these predators. Adorable or not, these animals need to be kept far and away from human life.