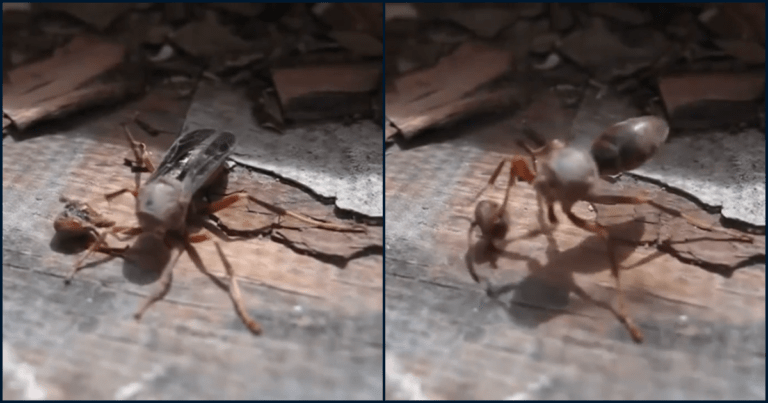 First shared on Reddit, this story of a wasp losing its head then literally carrying it as they fly away has been incredibly popular, for obvious reasons.

A large debate followed the video and people are wondering how, after being decapitated, can the wasp look for and find its lifeless head, pick it up, then fly away to safety with it.

There have been over a thousand comments on the original post where people of the Reddit community urgently try to solve the case of the decapitated wasp.

While some are suggesting the insect is a zombie, some users actually give a great explanation of how it’s possible for the wasp to survive the way it did.

Before we tell you a great description of the event, check out the video down below and share your thoughts on how the wasp was able to stay alive.

One Reddit user shared with everyone the real reason as to why the wasp was able to fly away with its decapitated head in hands.

The Reddit user roughly stated that insects do not have a “brain” in their heads, instead, they have multiple small brains called ganglion that are spread out across their body. Therefore, one of the small brains would control one pair of legs, another brain would control the wings, and so on.

So, this wasp managed to survive the initial injury of losing its head and wasn’t going to be killed by injuries, meaning the ganglions in the wasp’s body are still intact and are still able to control this now blind insect.

The inevitable ending for the wasp is likely to be a slow death from starvation, as now it has no possible way to consume, what it refers to as, food.

Are you amazed or creeped out by the video? Let us know in the comments.