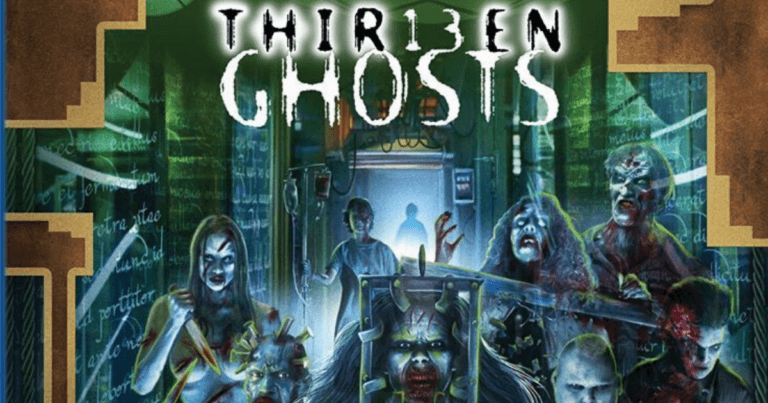 Say what you want about the 2001 horror film Thirteen Ghosts (also known by its stylized title TH13EN Ghosts), it sure has its own saving merits.

It is a film that is destined to be a cult flick and something that needs to be treated seriously. The cast alone is already quite neat, filled with actors popularly known for comedies such as Tony Shalhoub, Matthew Lillard, Embeth Davidtz, Shannon Elizabeth, Rah Digga, F. Murray Abraham, and Alec Roberts.

But Thirteen Ghosts is memorably known for its production design, effectively building the world its conflict demanded. Kids from the early ‘2000s still have a traumatizing memory of those glass walls installed in the movie’s central house, where the ghosts scattered around.

If you have not seen Thirteen Ghosts, a single viewing is harmless. It might be hilariously campy for today’s standards. But for the ultimate fans, you might consider owning a new collector item from Scream Factory – a Collector’s Edition Blu-ray of Thirteen Ghosts.

This new Blu-ray edition is filled with exciting bonus features, some of which have never been released before such as interviews, audio commentaries to aid your re-watches, and a lot more. Here’s the list of the special features:

The Thirteen Ghosts Collector’s Edition Blu-ray will be released this July 28, 2020.

What are your thoughts on this Thirteen Ghosts Collector’s Edition Blu-ray from Scream Factory?  Share your reactions in the comments section below.