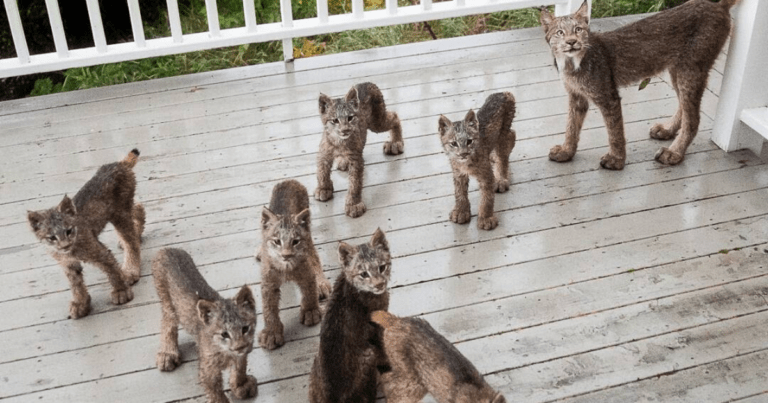 Here’s something that will cheer you up this week.

One sunny morning in the town of Anchorage, Alaska, Tim Newton was awakened by the strange noises he was hearing outside. Since these sounds are something that he didn’t recognize, he quickly got out of bed to go outside to investigate.

To his surprise (and most likely, relief), the sounds turned out to be coming from a lynx that was just hanging around in his back porch. These sightings are usually normal, but Newton was charmed to see that the lynx had a family of seven with Mama Lynx appearing to lead a possible outing with her babies.

As a renowned photographer, Newton’s first course of action is to immediately snap many photos as he could. It’s not every day you see a family of Lynxes hanging out, doing their own thing without worrying about humans.

The photos Newton was able to capture, which he generously shared on his social media pages, are just beautiful – a fitting way to share such a charming moment.

“The seven kittens were such a joy to watch playing on our deck! Mama Lynx was very watchful over them – taking a good long look at that photographer near them and his clicking camera,” Newton described the event.

Newton is known for his nature-centric photographs, but this irresistible lynx family might be his best. Here are some of the beautiful moments that Tom Newton was able to capture:

To cap this off, here’s a gorgeous shot of a baby lynx who seems to be disrupted by playtime with his other cute siblings.

What are your thoughts on Tom Newton’s discovery of a family of lynxes hanging around his back porch? What will be your first mode of action when you encountered the same thing? Share your reactions in the comments section below.