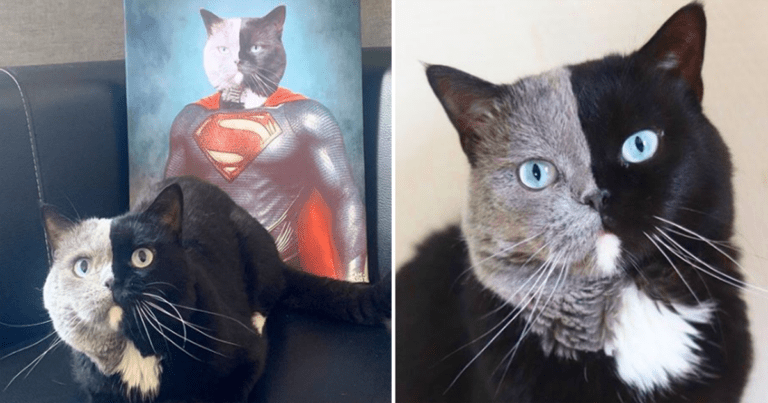 Animals with unique marks or conditions are often internet sensations, but one feline that has surprisingly managed to exist without becoming a massive trend on social media is Narnia.

This two-toned cat is beautifully majestic and while his rare genetic trait – which gives him a half and half face consisting of two completely different colors – serves as his standout feature, his crystal eyes are also extremely mesmerizing.

The story surrounding Narnia’s half-face is quite a confusing one. A genetic anomaly labeled “chimerism” is the cause of two-toned male cats, and is developed due to an extra X chromosome being present pre-birth.

Incredibly, the cat was taken for tests by his owner, Stephanie Jiminez, which ultimately revealed that he doesn’t have this condition, making his uncommon features even more bizarre.

Amazingly, Narnia has successfully become the father of two stunningly adorable kittens, with one outstandingly being grey, and the other black.

Narnia’s characteristics have been passed down to black-haired Prada, and grey-haired Phoenix.

Both Phoenix and Prada are missing one distinct feature detail that had not been passed down from their father, and instead of gaining the piercing blue eyes of Narnia, the two kittens had to settle for a deep, chocolatey brown.

Since their birth sometime last year, grey-furred Phoenix has been passed on to a new, loving owner which’ll be her forever home.

However, black-furred Prada is said to be on her way into her new home shortly.

Narnia will, of course, remain with Jiminez in Britain and eyes will slowly begin directing towards the phenomenal cat if he is allowed to breed once again.

How amazingly beautiful is Narnia and his two kittens? If you’re an instant fan after seeing him for the first time, make sure you leave a message down below and let us know how you feel about the situation.