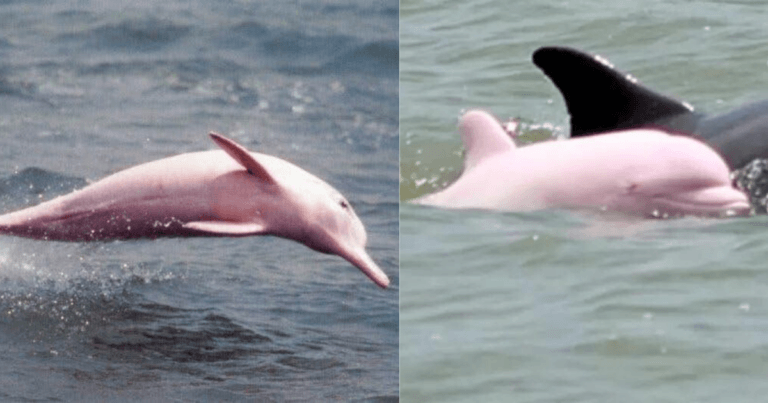 We often visualize dolphins by their grayscale attributes, and how they amazingly leap in and out of the ocean with all their charm.

Because of their distinct features, it can be hard to see them in a different form, even more with an entirely new appearance.

In 2007, a man discovered a dolphin that many will find unbelievable. The animal was shown having pink features, from the head down to its tail. Since the sighting was something that surprised a lot, the rare dolphin quickly became a phenomenon and crowd favorite, and has always been tagged by the name of “Pinky.”

Pinky was actually an albino dolphin, in which her skin color is rooted from a mutation that greatly affects the genes processing melanin production (in other words, albinism). Her parents are presumably black/grey-colored, and the combination might have resulted in her exceptional pink attributes.

Speculations from other researchers believed that Pinky is a product of genetic variation of two dolphins with a very distinct look.

The good news is that Pinky is not stuck in an aquarium or zoo shelter, and was deservedly given to enjoy the oceans of the Earth. She was also lucky since did not carry the usual conditions often connected with albinism such as poor vision and sensitivity of the skin.

A decade later, Pinky emerges from the ocean with an adorable sighting that sees and her a pair of dolphins playing around the Calcasieu River in Louisiana. The two dolphins with her, a black dolphin and a calf, presumably her baby, surprised many since this is the first reported sighting about Pinky with possibly her new family.

Here’s the video of the recent sighting of Pinky in Calcasieu River, Louisiana:

What are your thoughts on Pinky, the pink-colored dolphin, and his cute calf? Share your reactions in the comments section below.