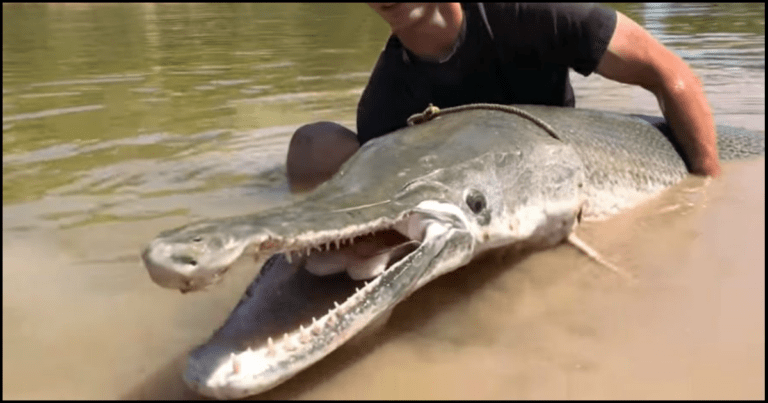 A man that’s known as the ‘Fish Whisperer’ recently endured a crazy battle with a 7-foot, 230-pound river monster which was said to be half the size of the Jon Boat that aided in catching it.

These large majestic fish are quite misunderstood and often referred to as a trash fish, but this man shows a lot more respect to the underwater creature, as you can see in the video below.

The 7-minute video shows the insane exchange between the man and the fish, and after successfully capturing it, we’re thrilled to see him release the beast back into the river.

As seen in the video, the alligator is outrageously enormous and poses some problems to the skilled fishermen.

The monster-gator measured at 92-inches long with a 42-inch girth, which gives it an estimated weight of almost 230lb.

In the end, the beautifully large fish was escorted back into the river which will give another angler the chance to have a lifetime moment if the gator is ever caught again.

A crazy fact about this particular alligator gar is that it has most likely been swimming around this narrow stretch of water since World War II, making it around 80-years old.

Interested in the unthinkable? You can now check out these 10 incredibly bizarre animals that many people don’t know exist, HERE!

If you want to stay on the topics of animals but want something a little more heart-warming, go over and check out these tiny pool ramps that are helping to stop animals from drowning, HERE!

Lastly, if you’re a creative person, you will appreciate these wonderfully realistic sand-animals created by Spanish artist, Andoni Bastarrika, and you can find them, HERE!

What did you think of the gigantic alligator? If you’re in awe like us, make sure you share your thoughts and opinions with us in the comments.