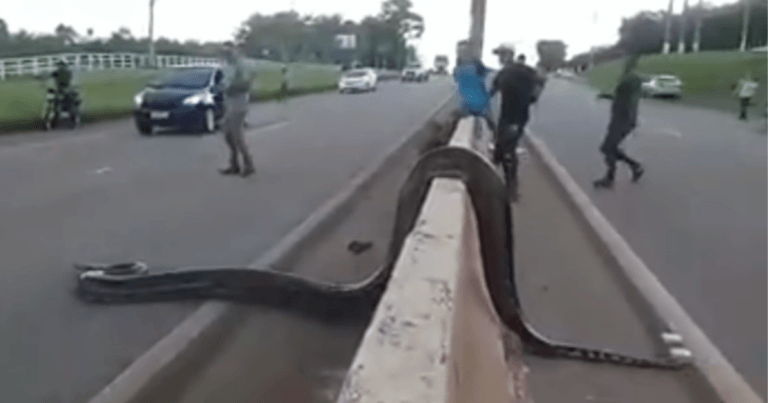 Whether you’re afraid of them or not, it’s always fascinating to read about sightings of snakes around the world. Like the most unexpected pests inside your house, at most times, they have discovered lying or crawling around places you would not think they will be.

Of course, some towns will have that “one” encounter with a snake where the legless reptiles appear all of a sudden inside a toilet. That encounter where your day seems to sail smoothly, immediately being interrupted to who-knows-what these snakes are doing in there in the first place.

But in these scenarios, there will also be one person in the room where he or she gets the itch to record their discovery as if a miracle took place.

A similar instance happened in a major driveway in Brazil. Travelers and local drivers were just passing by the road in the town of Porto Velho when a big (literally, massive) anaconda suddenly crawls into the highway.

According to the online news website G1 Globo, the anaconda snake is measured to be more than three meters (9.8 feet) long and weighed an average of a whopping 30 kilos or 66 pounds.

Watch the video of the anaconda sighting here:

In an interview, local biologist Flavio Terassani mentioned that the anaconda is estimated to be 10 years old and presumably was just searching for food or shelter when it passes through the road.

When he found out that people around the snake immediately started to record videos and photos of the reptile, he warns that everyone should be extra cautious before approaching or even filming the animals as they are likely to attack someone when it feels threatened.

What are your thoughts on this massive anaconda discovered in a driveway along Porto Velho, Brazil? What will be your first reaction if you stumbled upon a snake while driving? Share your reactions in the comments section below.