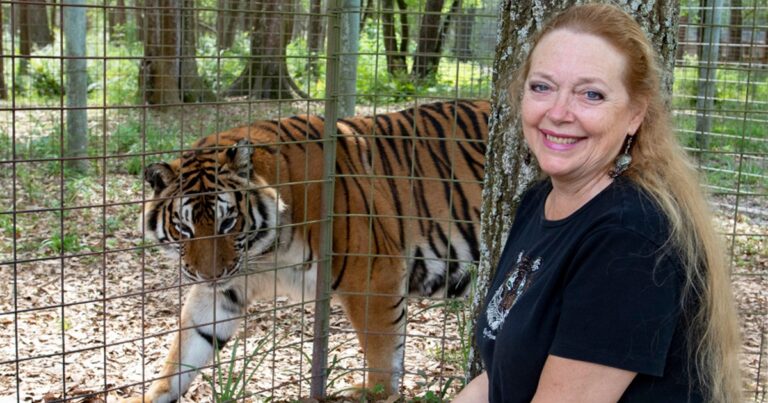 Carole Baskin has had quite a few ups and downs during her now-infamous career. Though she received fame for a secondary role in Tiger King. The show followed the working life of Joe Exotic, a now-former zoo owner convicted of trying to have Baskin assassinated. After being seen somewhat of an antagonist in the series and a lengthy court battle, she was awarded Exotic’s zoo.

However, things have gone slightly downhill in the weeks following the lawsuit. Though things have been steadily on the increase, she’s fallen foul of Australian comedian Tom Armstrong. In the prank, he convinced the zookeeper to say ‘hi’ to Rolf Harris and Jimmy Saville, both notorious for being convicted sexual predators in Australia and the United Kingdom.

Rolf Harris was an Australian entertainer, although he was convicted of a dozen indecent assaults against teenage girls, with the acts taking place between 1968 and 1986. In June 2014, he was sentenced to five years and four months behind bars.

Jimmy Saville was a British entertainer who spent several decades with the BBC. He became famous for his style – he notoriously wore tracksuits and excessive amounts of jewelry – before being accused of sexual abuse. Following his death in 2011, the amount of people who accused him of sexual abuse numbered in the hundreds.

Clearly, this was news to Carole Baskin following the now-infamous video. In the video, she clearly reads from a script written by Tom Armstrong, as it features several puns alluding to both abusers’ crimes. She also wished Harris a happy birthday.

However, Carole Baskin isn’t the only celebrity that Tom Armstrong has pranked in recent weeks. He also got Beverley Mitchell, star of the American show 7th Heaven, to give a shout out to Ivan Milat, the country’s most infamous serial killer.