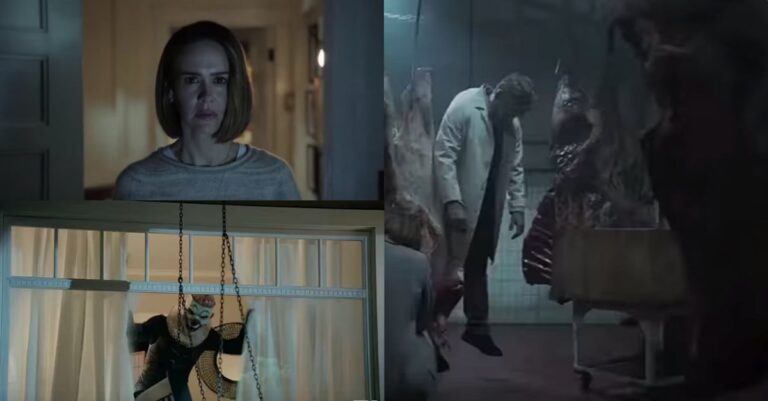 After months of waiting impatiently and getting sneak peaks of terrifying cult-ish chants and bee-spewing clowns, we can finally take a better look at American Horror Story: Cult. Set to premier on September 5th, the seventh season has everyone marking their calendars. The new trailer is simply astounding.

The trailer highlights election night in 2016. Evan Peters, in signature blue hair, asks, “What’s the thing that scares you the most?” right before the scene cuts off to Trump’s presidential victory announcement. This sequence is anything but subtle. Sarah Paulson is seen screaming in horror while the psychotic Peters humps the television enthusiastically.

“It Has All Been Getting So Much Worse”

It is obvious that Sarah Paulson is not in her best shape. The trailer also hints at her “coulrophobia” or the fear of clowns despite not directly mentioning her post-9/11 trauma. It has been years since his 1950s murder spree but nevertheless the Freak Show monster has become the embodiment of the AHS universe lore.

Billie Lourd, the babysitter from hell, is known as the child-hating Wednesday Addams. She offers a Twisty figurine to Paulson’s and appears to be in cahoots with Peters.

There are plenty of Twisty copycats in the trailer, appearing from ice cream trucks and popping up in windows. We can only gauge that the Twisty-inspired cult is either on the side of the government or rebelling against it. As Peters said, “If you get people scared enough, they will set the world on fire.”

“They Will Set The World On Fire”

The trailer ends in a close-up of a cackling clown as if the flashing scenes of horror were not enough. The trailer is chockfull of scares but it gives nothing away, building up the hype and excitement for the real deal. Watch the exciting new trailer below: