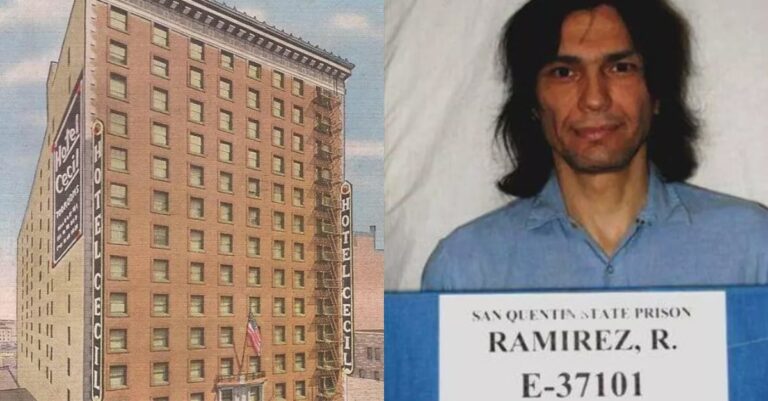 Have you ever heard of the Cecil Hotel? If not, then you are in for a treat. We are going to tell the several grisly suicides and murders that have earned the hotel a bad name to this day. Well known for his bloodstained history, Cecil is a place where you might be sleeping next door to a serial killer or maybe witnessing the suicide of young beautiful woman. Or perhaps if you’re unlucky enough you might never wake up to see the light of another day.

This is one of the many reason that Ryan Murphy filmed the fifth season of American Horror Story in this eerie hotel. The hotel reached top of its notoriety when the public watched the video of a dead young woman on the hotel roof. The disturbed owner had to change its name from Cecil to Stay on Main. But did the name change its fate? Absolutely not!

The notorious serial killer called Night Stalker remained a blood-chilling figure in San Francisco and Los Angeles from June 1984 to August 1985; killing 13 in this short period. He was a walking monster who used gruesome tools like a machete, a tire iron, or even a hammer for killing people. The worse in this all is that he returned to his hotel room in Cecil every night after his “tiring business” and slept snugly. Richard Ramirez (his real name) paid only $14 per night and used the hotel dumpster to dispose his blood stained clothes. He was arrested after he ended his stay at Cecil but his connection to this creepy hotel is unforgettable.

25-year-old Grace E. Magro was found entangled in telephone wires after she jumped (or fell) out the window of her hotel room. She was taken to a hospital but she died due to her serious injuries. The police could not determine the cause of her death – suicide or murder. Her room-mate M.W. Madison, the sailor, could not explain her fall.

An Austrian journalist and author Johann “Jack” Unterweger was imprisoned for killing a young man. After his bail, he headed to Cecil in 1991 and stayed there in order to search for a crime story in LA. Then his killing spree began. Several women’s deaths in Europe and three s** workers in California’s murder are attributed to him.  He was eventually arrested and convicted of killing several people. He received the death sentence but was never killed. He hung himself in his cell on the night that he received the sentence.

Elisa Lam went missing from the hotel in January 2013. She was a 21-year-old Canadian tourist and for three weeks no one knew of her whereabouts. A maintenance worker found her naked body floating in the water tank. And that was after the hotel guests complained of a foul smell in the water and an altered color and taste.

Lam was suffering from depression and bipolar disorder which may have forced her to crawl into the tank where she slipped and fell in the water and met her ill fate. The LAPD video footage shows her acting weirdly prior to her disappearance.

In September 1944, 19-year-old Dorothy Jean Purcell was staying at Cecil hotel with Ben Levine, 38. Unlike the average mother, she was oblivious to an ongoing pregnancy. She felt uneasy and went to the bathroom where she was shocked by the birth of a baby boy. The young mother lost her mind and threw the baby outside the window as she thought it was a stillbirth. The baby landed on the roof of a side building. She was charged of homicide but the jury declared her not guilty and sent her to a psychiatric institute instead.

Does The Hotel Incite Suicidal Tendencies In Guests?

Maybe the hotel environment is infested with the grim air of death that many guests simply end up committing suicide! W.K. Norton, a 46-year-old man, was found dead in November 1931 in his room. He had swallowed poison. Since then almost a dozen guests have committed suicide in Cecil.  Even a passerby was killed from the falling body of the suicidal Pauline Otton, 27. She fought with her husband and killed herself along with a 65-year-old man named George Gianinni in October 1962.

Another Murderer Finds Refuge In The Notorious Hotel

A 23-year-old nurse Teri Francis was found dead at her beach home where she lived for seven years with her husband Robert Sullivan. The police suspected her husband as he did not return home after the murder. Two months later he was found living in Cecil reviving the hotel name as a sanctuary of criminals.

Helen Gurnee was a middle-aged woman who came from San Diego and was staying at the Cecil in October 1954. She committed suicide by jumping from the seventh floor and landing on the Marquee of the hotel. She died on the spot but an eyewitness Melvin Hinkley, 26-year-old, witnessed the complete incident. He was taken to the hospital later for treatment.

A Man Opened Fire From The Hotel Rooftop

A young man called Jeffrey Thomas Paley scared everyone by opening fire from the rooftop of the hotel. But this time, luckily enough, none of the hotel guests and passersby were hit by the bullets and he was soon arrested. He later told the police that he did not intend on killing anyone. He had been under mental treatment at a hospital at the time.

Pigeon Goldie Was Raped And Killed During Her Stay At Cecil

Goldie Osgood was a retired telephone operator who was called “Pigeon Goldie” for her love of pigeons. She was found mercilessly killed in her room at the Cecil, raped, strangled and stabbed. Her valuables were all stolen. A young man was found soon after her murder, his clothes drenched in blood as he walked through Pershing Square. He was 29-year-old and was called Jacques B. Ehlinger. However, he was found to be innocent and Pigeon Goldie’s killer was never found.

A Ghostly Figure Photographed Lurking By The Hotel Window

Murdered and killed mercilessly, many souls do not rest in peace after their death. A photographer found two ghostly figures lurking around his room window at night. He photographed them and could not sleep the rest of the night from what he saw.

The history of the Cecil Hotel is botched with gruesome incidents. Not only has it housed some of the more notorious criminals of time, but it has also been a bad omen for those who settled in it. In fact, even those who simply pass by are susceptible to unfounded harm. It is best to steer clear of the hotel in all ways possible.