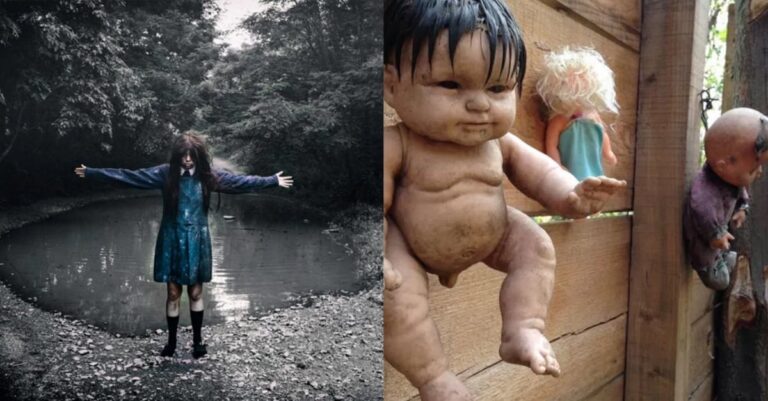 The Earth is full of wonders and naturally beautiful spots. People from all over travel around in search of breathtaking places on the planet. However, what most tourists and travelers fail to realize is the fact the Earth is also full of terrifying places. If you look in the right places, you will find horrors beyond your worst nightmares. We went on AskReddit and collected some personal experiences of some people who visited a few of the scariest places on Earth.

The Town That Burned Forever

It is a Pennsylvania coal mining town that ended up having a GIANT underground fire relatively (30 yrs?) recently. The fire burns to this day, and the town has been since evacuated. You can feel the heat from the ground under your feet—it’s basically an anomaly field from S. T. A. L. K. E. R. But in real life.

The ocean always freaks me out.

You’re treading water on the surface of the Mariana Trench in the western Pacific, the deepest part of the world’s oceans. There’s a storm raging, and the waters are violent. It is the middle of the night, and everything is pitch dark. The water is frigid cold and wave upon wave relentlessly hit you under the surface. You glimpse the faint light from the moon slightly illuminate the turbulent waters as you struggle to stay afloat. Gasping for air, you glance around desperately looking for anything that could help you.

Your heart sinks as you realize there is nothing but ocean for thousands of miles. Then, a giant wave slams you under the surface, plunging you deep into the water. As you sink into the dark abyss, the thought of 7 miles of water beneath you horrifies you. You have no idea of what terrors lurk under you in the darkness. You struggle to push yourself back to the surface, but your arms and legs have given up….

Anyone would be scared shitless of this.

For a different value of ‘scary’ than most of the posts here, I nominate Mt. Yasur on the island of Tanna in Vanuatu.

Mt. Yasur is an active, erupting volcano. Tanna is a remote, off-the-grid island inhabited by, among others, America-worshipping John Frum cargo cultists. There’s little government to speak of in Vanuatu, so there are certainly no guard rails or anything at the volcano. You can walk right up to the lip, watch chunks of liquid rock get flung in the air high above you, landing anywhere they damn well please. The air rains thick, gritty ash particles that you shake out of your hair for days.

In terms of my inner monkey brain screaming ‘WHAT THE F*** ARE WE DOING HERE, GO GO GO!,’ it’s one of the most terrifying places on Earth. I don’t know what kills you when you’re hit by falling magma (are you crushed, punctured, or burned?), but my brain stem did not want to hang around to find out. On the other hand, my rational brain was consumed by how overwhelming something like a volcano is when compared to a mere person. Mt. Yasur simply doesn’t give a s*** about you. It was a great example of what Burke calls “the Sublime.”

Aside: Don’t get me wrong—the John Frum villagers are wonderfully warm, hospitable people, and I loved meeting them. But their peculiarities do add to the sense of profound alien-ness of the place.

Island Of The Dolls

Isla de las Munecas, the Island of the Dolls in Mexico. Don Julian Santana Barrera was the island’s only inhabitant and one day a little drowned girl washes up on his shore followed afterward by stray dolls washing up. Since that day, he began collecting the dolls and displaying them. Everywhere. In 2001, however, he drowned himself and washed up on that same shore like the little girl he found. I’m pretty sure those dolls killed him, or he went insane THINKING one of the dolls was trying to kill him. Either way, it’s terrifying and disturbingly real, so if you’re scared of Chucky stay far away from that place. Far away.

Basically the site of a Soviet-era gas mining operation, the site was deemed worthless. As the Soviets were leaving, a massive pocket of methane was discovered and was escaping too quickly to be collected. The scientists lit the deposit on fire, but it has been burning since the 1970s. History lesson aside, to this day, the place looks like an opening to Hell.

Pripyat, Ukraine. It was the city next to Chernobyl. In addition to still being dangerous because of radioactivity, the fact that it’s a giant abandoned city is pretty creepy in and of itself.

Poveglia Island, just off the coast of Italy.

used by the ancient Romans as a place to quarantine people afflicted by various plagues. When they died, they were buried in mass graves on the island.

used as a huge quarantine center during the Black Plague. More mass burials. By the end of it, so many people had died that the soil was reportedly 50% human ash (though this was using medieval estimates and was obviously unscientific, so who knows).

An asylum was built in the center of the island in the early 1900s. Patients reported seeing paranormal activity but nobody took them seriously. A surgeon working in the facility slowly started going insane and began to hear whispers even when nobody was around. He was frequently accused of brutally mistreating his patients, and was murdered under unexplained circumstances after about a year on the island. The clinic was closed shortly thereafter.

Currently, Poveglia is closed by order of the Italian government. People may not visit the island under pain of imprisonment and heavy fines. The official reason is that it’s structurally unsafe, but fishermen refuse to even go near it because human bones from the burial pits are always caught on their fishing nets.

TL;DR: I don’t really believe in ghosts but I wouldn’t want to spend a night on Poveglia Island.

I’m going to say the Tsingy de Bemaraha Nature Reserve [in Madagascar]….It’s a massive forest made of stone that will slice you to ribbons and stab you if your attention falters even a second. If you woke up in the middle of that without any specialized gear, you’d never make it out alive. It’s a different brand of terrifying than I’m used to, so it holds a special place in my heart.

I would say, a few feet away from the infamous elephant’s foot inside the chernobyl reactor. If you look at it, you die.

Thirty years after the Chernobyl disaster, the elephant’s foot lethality has decreased considerably (nuclear half-lives and all that). Considering that it’s still blasting out ionizing radiation (which ravages DNA structures, possibly causing cancer—you’re playing Russian roulette with a machine gun), I wouldn’t want to go anywhere near that thing for at least 100 years. Even being around a corner doesn’t necessarily mean you’re safe. Radiation is an electromagnetic wave form, so it can potentially be reflected in a diffuse dispersal pattern meaning you just have a bit more time before a lethal dose.

Tower of Silence is the most frightening place I can think of.

Define Catacomb: A large series of tunnels used as mass graves in the early centuries, often an underground maze full of rooms and recesses for coffins.

Although there are a number of known enormous catacombs systems around the world, the ones beneath Paris scare me the most as they still claim many lives today.

The tunnel system beneath Paris was originally a quarry, materials dug from the underground labyrinth were used in the construction of Paris itself, but eventually bodies started to get buried there and although it is generally illegal to enter this maze buried under the city many still do, cataphiles are the names given to these brave people and plenty of people go missing down there every year, they are never found and search parties aren’t really an option because it is virtually impossible to track the people swallowed by the mass grave let alone re track your own steps if you were lost, most who get lost down there are doomed to drift further through the half-meter-wide tunnels and further away from the entrance until they die. They then add to the 6 million lost souls down inside. Six million.

There are also catacombs under Rome, but the Catholic law does not permit any exploration down there, also not far from Paris are the Odessa Catacombs lying underneath the city Odessa, here’s a fun fact that is more blood chilling than fun: the distance between Paris and Odessa is 2138km, the area of the Odessa catacombs is around 2500km.

My feelings? Just the thought makes me uneasy, it’s very common for tourists and daredevils to go missing forever in places like this, it is also a common thing that you sometimes have to go further down to get back out, one wrong turn is death but not instant death, hours and hours, days and days of panicked searching in the dark, your phone will start to go flat, you will hear movement behind you, in front of you, miles away or just over your shoulder and
you will start to become hungry and thirsty and tired and you will lose track of the days gone by because the sun is only warming the surface which by now could be several hundred metres up, or it could merely be 20 meters up, but your still no closer to leaving this place and seeing the sun again.

Now that you have a first-hand opinion from people who have actually visited these terrifying places, do you plan on getting a first-hand experience? After all, any place can be great for travel and holidays if you are brave enough.