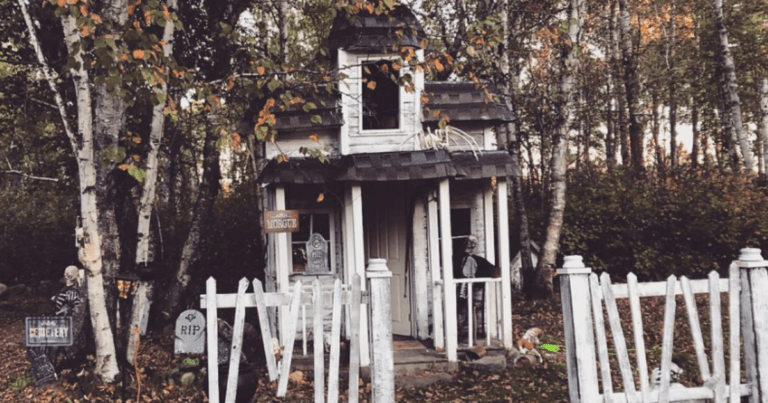 Most innocent little kids have always dreamt of having the treehouse of their dreams, or just an unsafe plank of wood they can sit in on top of a tree.

And most dads either refuse to make their children a treehouse or make it so dull that even a child isn’t interested in it.

Well, that stereotype doesn’t apply to this dad. Ben Norman built the most insane playhouse for his kids, and what’s even more epic is that it’s haunted.

This horror-themed playhouse took him around 6 months to build, and after admitting he only worked on it in his spare time, that’s pretty impressive in my book.

The creepy playhouse comes with its own personal graveyard, scary sound effects, strobe lights, and what terrifying house comes without its very own freaky fireplace?

First reported by 103GBF, Ben kindly shared some pictures and a video of the inside to show everyone a little more of his dark creative side.

The 1-minute clip shows the playhouse in all its glory and instantly makes you feel on edge as you begin to enter. The graveyard outside filled with red-eyed skeletons who watch your every move is as unnerving as it sounds.

Alongside the creepy video, Ben posted pictures from the early stages of the building process, showing us the incredible before and after of the playhouse.

Here, you can see the structure being built, prior to the masterpiece that follows.

And here, you see the playhouse any little horror fan will be ecstatic to call their own. All credit goes to Ben, a very talented father who found spare time to build possibly the best spooky playhouse in the world today.

You can find the eerie video, along with many more pictures of Ben Norman and his family, as well as their playhouse, on his Flickr page HERE!