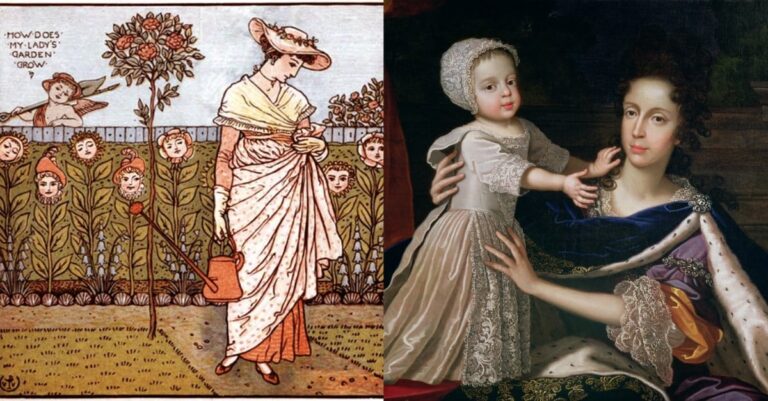 If you are an avid reader of horror novels and a big fan of the authors, you might be surprised as to what originated your love for gore and horror. Turns out, the reason might just be the classic nursery rhymes you read as a child. From Mother Goose to Jack and Jill, kids’ nursery rhymes are chockful of dark tales that mostly go by unnoticed.

The following list of some of the most loved and widely acclaimed nursery rhymes and their dark origins will make you wonder who said they were ideal for kids to begin with.

Although the rhyme does not contain any offensive ideologies, it does contain a verse which originally ran “catch a [n-word] by the toe”. A notable incident involved a Southwest Airlines flight attendant who used part of the rhyme “eeny meeny miny mo, please sit down its time to go.” This resulted in the airline being sued by plenty of offended and outraged passengers.

It is agreed upon amongst most scholars that this rhyme is about the Great Custom, a tax on wool which was carried out in 1275. Additionally, the fact that use of the word “master” surfaces and that the sheep are black leads many to believe that a racial message exists, too. Schools have banned the song from being sung and some places have even decided to change the color of the sheep to “rainbow” for instance.

The song, surprisingly, is not about gardening at all. The term “contrary” was used to refer to a murderous psychopath. The poem is in fact about the murderous nature of Queen Mary I of England who is also known as Bloody Mary. Silver bells and cockle shells are notable instruments used to torture people. They are not gardening tools. During her reign, she used these instruments (to name a few) in order to execute hundreds of Protestants.

Although a lot of theories regarding the origins of this rhyme exist, the most commonly agreed upon one is that it is in fact about a Viking attack. More specifically, it is though tot be about the attack launched by Olaf II of Norway on the London Bridge around the year 1000. The fact that the song proliferates around the world adds more credibility to the theory. It is believed that the Vikings would have proudly spread the tales of their accomplishments far and wide while on their travels.

The silly words of Jack and Jill are mostly interpreted in dirtier contexts. However, the origin of the poem is far darker and grotesque. One of the many theories about its origins involves the beheadings of Louis VXI and Marie Antoinette. However, this one does not stand the test of time as the poem was created 30 years before the event actually took place. Scholars are of the idea that the poem chronicles the attempts of King Charles I to reform liquid measures’ taxes. Upon the Parliament rejection of his suggestions, he made sure that the volume was reduced on half and quarter-pints… known as jacks and gills.

A popular interpretation of this song goes to say that it speaks of the son of Mary of Modena and King James II of England. It is widely believed that a changeling switch occurred in the delivery room in order to make sure that the heir to the throne was Catholic.

The rhyme that appears to be about geese is in truth about Catholic priests who were persecuted when they hid in order to say their prayers in Latin. The original version contains a line about an old man who “who wouldn’t say his prayers. So I took him by his left leg, and threw him down the stairs.”

The three mice are thought to represent three Protestant bishops –Nicholas Radley, Hugh Latimer and Thomas Cranmer (The Archbishop of Canterbury). Their failed attempt at overthrowing the queen is highlighted in the poem. The blindness is an indication to their beliefs. In the end they were burned at the stake due to their heresy.

Many people share the opinion that Old Mother Hubbard was neither about a mother nor in fact a woman. It is believed that the rhyme was written as a mockery of Cardinal Thomas Wolsey. Wolsey created his own political downfall upon his refusal to grant an annulment to King Henry VIII so he could marry Anne Boleyn.

This poem has two famous theories about it. The first theory suggests that it refers to the Great Plague of London in 1665. The term “rosie” is the rash that came with the plague. Those infected by the plague used to walk around with posies in their pockets to cover up the smell. The term “we all fall down,” refers to the 15% of the population that perished in the plague.

The second theory comes from folklorist Philip Hiscock who states that the origins of the rhyme come “in the religious ban on dancing among many Protestants in the 19th century, in Britain as well as North America. Adolescents found a way around the dancing band with what was called in the United States a ‘play-party.’”

A former governor of the Wakefield Prison in England, historian R.S. Duncan, shares that this popular children’s nursery rhyme actually originated in a women’s prison. The female prisoners in the 420-year-old institution got their exercise by circling a mulberry tree.

Now that you know your dark deviations are probably sourced from the plethora of twisted nursery rhymes read to you as a kid, how likely are you to allow your kids to read them? Stephen King, Mary Shelley and Dean Koontz have nothing on these dark and morbid nursery rhymes.