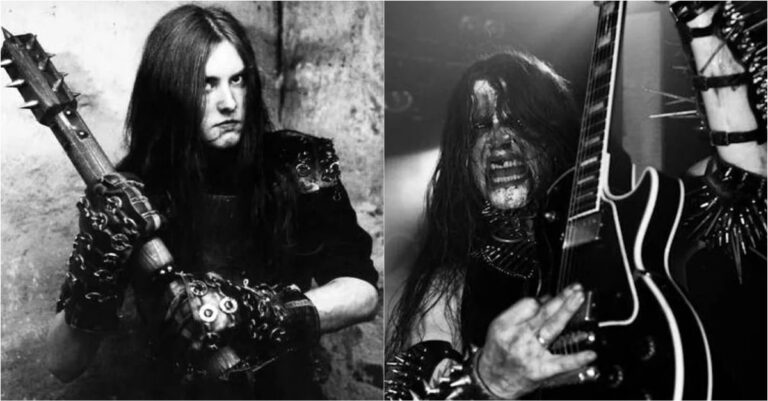 In modern music, black metal forms one of the most violent, bizarre and sinister movements. Predominantly Scandinavian, this sub-genre originated from Norway and rose to fame in the 90’s through arson, murder, and suicide. Abrasive and relentless, the music is accompanied by lyrics of death, anti-Christian sentiments, and blood. The history of black metal is riddled with harrowing tales of infamous crimes.

“Excuse All the Blood”

One of the most notorious black metal bands is Mayhem. The history of the band is full of violence and extreme anti-social phenomenon. In 1991, the lead singer of the band, Dead (real name Per Ohlin) slit his wrists and shot himself in the head using a shotgun. His suicide note read: “Excuse all the blood.”

Mayhem’s Guitarist Used His Bandmate’s Skull For A Necklace

Euronymous, the guitarist for Mayhem, was the first to find Dead’s body after his suicide. Before calling the police, Euronymous rearranged items at the scene of the suicide and captured a photograph which was later used as the cover of the band’s album “Dawn of the Black Hearts.”

According to rumors, Euronymous did not suffice by just capturing the scene. He used Dead’s brain to make a stew and also collected pieces of his skull and made them into a necklace. Euronymous allegedly also sent fragments of the skull to other black metal musicians, as a sign of respect. Morgan “Evil” Steinmeyer Håkansson from the band Marduk confirmed the latter and claimed to own a piece of Dead’s skull, some lead from the shot that killed him and even some brain matter.

Gorogorth Vocalist Gaahl Was Convicted of Kidnapping and Torture Twice

Gorgoroth is one of the most notorious Norwegian black metal bands. The band’s vocalist, Gaahl, has been accused of assault twice. In 2002, he received a one-year sentence for kidnapping and beating a man while threatening to drink his blood and sacrifice him. Four years later, he received another sentence for 14 months for a reenactment of the same act.

Mayhem’s Bassist Murdered His Bandmate and Burned Down Churches

The sole member of the one-man band, Burzum, and Mayhem bassist, Varg Vikernes, is easily the most infamous man in black metal. He was convicted of burning down three churches and murdering Euronymous, Mayhem’s guitarist, by stabbing him 23 times. He was sentenced to 21 years in prison in 1994, which is the maximum sentence in Norway. In 2009, he was released on parole after having served 15 years.

Infernus, the founding Gorgoroth guitarist, considers himself to be Satan’s minister on Earth. In 2005 he was convicted of r***. He appealed the decision in 2006 on the claims that he was too drunk to remember anything. The charge was changed to gross negligent r*** and aggravated sexual assault.

Gaahl from Gorgoroth gave a candid interview in the 2005 Canadian documentary “Metal: A Headbanger’s Journey” where he advocated the burning of churches:]

“Church burnings and all these things are, of course, things that I support 100 percent and it should have been done much more and will be done much more in the future. We have to remove every trace from what Christianity and the Semitic roots have to offer this world. Satanism is freedom for the individual to grow and to become Superman. Every man who is born to be king becomes king. Every man who is born to be a slave doesn’t know Satan.”

Gorgoroth Hosted an Illegal Black Mass in the Pope’s Birthplace

In 2004, at a show in Poland, Gorgoroth recorded a DVD called “Black Mass Krakow.” The filming process broke all the anti-blasphemy laws of Poland. They included plenty of Satanic icons, crucified nude models, severed sheep’s heads, and almost 20 gallons of sheep blood. These acts even violated Poland’s animal rights laws. However, due to the band’s obliviousness to the existence of these rules, they were cleared of all charges. You can watch the entire show on Youtube.

In 1993, a 15-year-old boy was murdered by three members of a Nazi black metal band called Absurd. At the time, the band members were 17 years of age. In 2000, Hendrik Möbus, the band’s vocalist, who was involved in the murder, was arrested in the United States for an outstanding warrant in Germany. He had violated his parole’s terms by doing a sieg heil salute to mock the victim.

Upon being arrested, it was revealed that Möbus was in league with William Pierce, an American Nazi. The pair of them were promoting hatecore, a racist genre of music, internationally and were making millions from it.

In France in 2013, Mayhem member Varg Vikernes and Burzum were arrested on terrorist charges. Vikernes who is shares strong anti-Muslim and anti-Jewish opinions and is openly a right-wing extremist was arrested on suspicion of planning a massacre. The arrest took place only four years after he had been released from prison for serving 15 years from a 21-year sentence for murdering Euronymous from Mayhem and conducting several church burnings.

Bassist and vocalist for Surrender of Divinity, Avajee, a Thai musician, was found murdered in his home in January 2014. The killer detailed his intent in a Facebook post stating:

“I have intended to end my life since I was 25. Because I’ll die eventually, I want to drag down those who tarnish Satanism with me. But I refrained from killing women and children. In my view, I have more respect for devoted Buddhists, Christians, and Muslims than those who call themselves Satanists without knowing anything about it. If I did not kill him, I’m sure he would be murdered by someone else later.”

“Death Is the Orgasm of Life”

Jon Nödtveidt, the front-man for Dissection, committed suicide in 2006. The whole incident was carefully orchestrated with candles, letters to his girlfriend and father, a suicide note, will and an open Satanic grimoire arranged on the scene.

Long before committing suicide, Nödtveidt was quoted for saying, “The Satanist decides over his own life and death and prefers to go with a smile on his lips when he has reached his peak in life when he has accomplished everything… Death is the orgasm of life!”

After a 10-year hiatus, drummer Faust rejoined Emperor in 2003. He had just been released for serving time for murdering a gay man in a hate crime. In the book “Lords of Chaos” which details the crime, Faust said, “This man approached me—he was obviously drunk and obviously a f*****.”

“It’s not a big deal, at least not in my opinion,” he said about propositioning the man for s** in the woods and then murdering him.

Nattramn, the sole member of Silencer, has a slew of bizarre rumors surrounding him. A tale of him cutting his hands off and sewing pig feet on his wrists surfaced a few years ago. Another story involves him attacking a little girl in a park with an ax. He drove the ax into her skull and almost killed her. In a later turn of events, it was discovered that it was Nattramn’s schizophrenic brother who carried out the attack.

Mayhem And The Flying Sheep Head

In 2003, during a performance, vocalist for Mayhem, Maniac who replaced Dead, flung a severed sheep’s head into the audience. It hit a concert goer in the head and landed him in the hospital. Regarding the incident, the man said, “My relationship to sheep is a bit ambivalent now. I like them, but not when they come flying through the air. I have a headache now.”

In 1992, church burnings began in Norway. More than 50 churches were burned down by 1996, many of which were important cultural landmarks. Those convicted were all related to the black metal scene.

Gaahl, the vocalist for Gorgoroth, admitted to being gay and in a relationship with Den DeVero, a Norwegian modeling agent, in 2008. The couple invested in a women’s fashion line designed by Sonia Wu called Wynjo. Ironically, “wynjo” means “happiness.”

The Allure of the Forest

Black metal bands seem to be incapable of resisting the allure of forests. Someone started a thread on Reddit asking why every black metal music video was set in a forest. Some of the select responses were:

“How do they even get electricity?”

“Because forests are metal as f*ck.”

It’s Tough Being in a Black Metal Band

Necrobutcher, the bassist for Mayhem, spoke to the Guardian in 2005 and admitted that it was tough being in a black metal band. Amidst the suicides, arson charges, murders, Satanic rituals and arrests, there is hardly any time for music. In regards to the violence surrounding the band, Necrobutcher said, “We couldn’t buy better publicity. But every time we lost a member, we had to find somebody else to replace them and start the whole rehearsing process again. We suffered in that way as a band.”

Given the association of sheep with black metal and Satanic rituals, it comes as no surprise that in 2014, a lamb was born in Norway with a corpse paint pattern on its face.

The annals of black metal are loaded with creepy, bizarre and violent encounters. Nowadays, black metal bands are leaning towards more hipster tastes. This has caused a large resurgence in the genre and the music. Careful not to delve too deep into this genre for it is a slippery slope down the line.