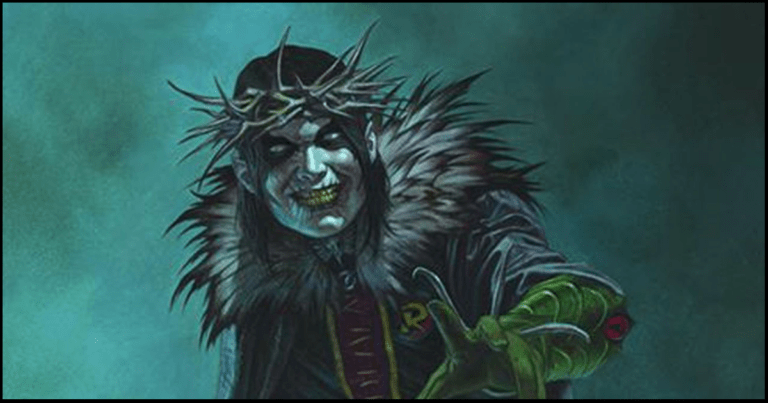 DC may have just revealed to us the scariest and most haunting villain to ever grace their comics, and while The Batman Who Laughs is incredibly unsettling, The Robin King – their newest addition – quite easily takes the throne for the most disturbing DC Comics character ever.

Scott Snyder’s latest creation will debut in Dark Nights: Death Metal #2 which is now available to pre-order leading up to its July 14 release.

Although we’ll witness the birth of The Robin King later this month, we don’t have to wait to see how DC’s creepiest antihero looks, and thanks to a Twitter post by DC Nation, impatient fans can get their first look at the sinner.

The Robin King resembles a murderous noble whose blood-covered claws are used to overpower and drain the life from his unfortunate victims.

His crown of thorns and sinister, pale-looking face only adds to the terror the killer unleashes. He can also be seen donning the famous ‘R’ often seen on Batman’s sidekick, Robin.

Alongside The Robin King’s introduction, DC’s Dark Nights: Death Metal #2 will feature a reunion for both Wally West and Jay Garrick, a misfit team of Batman, Wonder Woman, Harley Quinn, Swamp Thing, and Jonah Hex will travel across the terrifying Dark Multiverse, and we will eventually uncover what Lobo is doing in space.

We will finally be told what was said during The Robin King and The Batman Who Laughs’ final conversation, which could be his ultimate plan following his death at the hands of Wonder Woman and her Invisible Chainsaw (yep, she’s such a badass).

What are your opinions on The Robin King and his creepy appearance? Are you as excited about DC’s upcoming Dark Nights: Death Metal #2 comic? Make sure you share your thoughts with us and let us know how you feel in the comments.