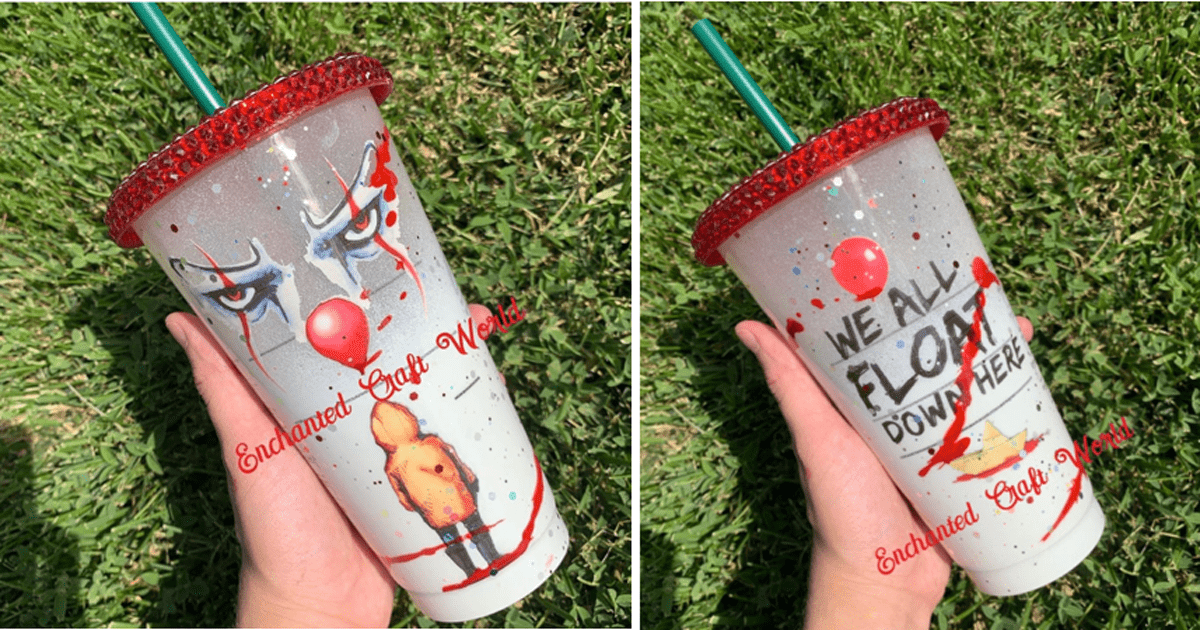 With Halloween getting closer, more and more companies are ramping up their holiday-inspired advertising. Starbucks, not known for taking things in half-measures, has taken its marketing to a whole new level. Customers looking to spice up their time at the coffeehouse can purchase cups inspired by the film IT, featuring the main antagonist Pennywise the Clown.

Created by Enchanted Craft World on Etsy, the cups are relatively affordable and quite high-quality. They feature an image of Pennywise the Clown’s make-up while a child looks toward the character. Though the character has had several representations on film, it looks as though the cup pays homage to the most recent films.

On the flip side of the Starbucks cup is a quote saying ‘we all float down here,’ which was made increasingly popular after the film received positive attention. George’s boat from the franchise also makes an appearance in the image, which looks hand-drawn. As such, fans of the films, or the book that they’re based on, should be happy.

It should be noted, however, that the cup is selling quite quickly. As such, fans who want to buy it may need to do so soon. This would also be the case if they want the product delivered before Halloween comes around.

However, this isn’t the only Starbucks cup design that Enchanted Craft World has released. In contrast, she has even done more child-oriented designs, such as a Frozen-inspired cup featuring notable characters from the franchise. Regardless of a buyer’s age, there should be a design for everyone.

Anyone looking to buy the Frozen and IT-inspired Starbucks cups, among others, from Enchanted Craft World should do so pretty fast. Each of the designs can be found on the brand’s store, with the majority of designs being relatively affordable, especially given the work that goes into them.