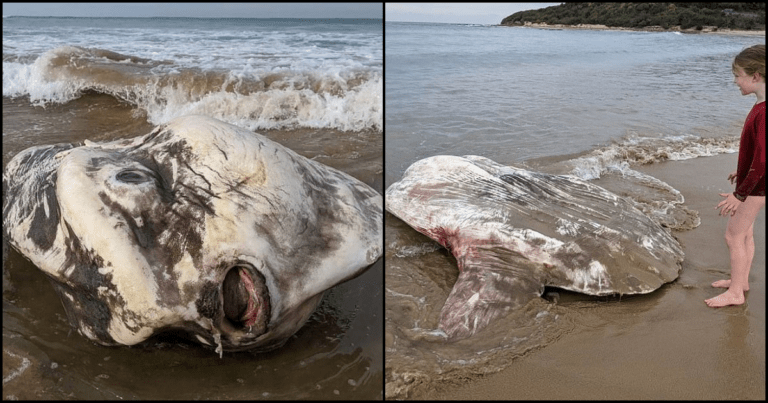 Tourists have been left stunned after they stumbled upon a unique, alien-like creature – known as a sunfish – that had been washed ashore an Australian beach.

On Saturday, July 25 – at the mouth of Kennett River on Victoria’s south-west coast – this enormous creature was found by passing tourists, where the beast was later identified as an ocean sunfish.

Two veterinarians – Cath and Tom Rampton – were in disbelief when they encountered the huge fish, claiming they’d never seen anything like it before.

James Barham and Tim Rothman discovered the sunfish some days after it was initially found and suggested the sea creature looked like an alien from range while sharing their experience with Geelong Advertiser.

In River Murray of South Australia just one year prior, a sunfish was found by local fishermen. This sunfish was estimated to be close to 2.5-meters in length and several hundred kilograms in weight.

Naturally, sunfish can grow up to 4.2-meters in height, 3-meters in length, and can even roughly weigh up to 2.5-tonnes.

Although it’s already an outstanding find, sunfish are said to be incredibly vulnerable in the wild, meaning it’s even more amazing that the tourists discovered this beast.

Unfortunately, sunfish are often dead prior to being washed up on shore, and fish collection manager, Ralph Foster, has explained why so many are surfacing on beaches as of late.

“One of the big dangers [for sunfish] would [be] being hit by big boats at sea.”

That’s one way for the fish to suffer injuries or death, he continued and explained another common way the creatures die.

“They often eat plastic bags thinking they are jellyfish which can kill them.”

The fish can be found in tropical waters all around the world and are commonly mistaken for sharks due to their fin.

Have you ever came across a creature that looked otherworldly? Let us know your experiences in the comments below.