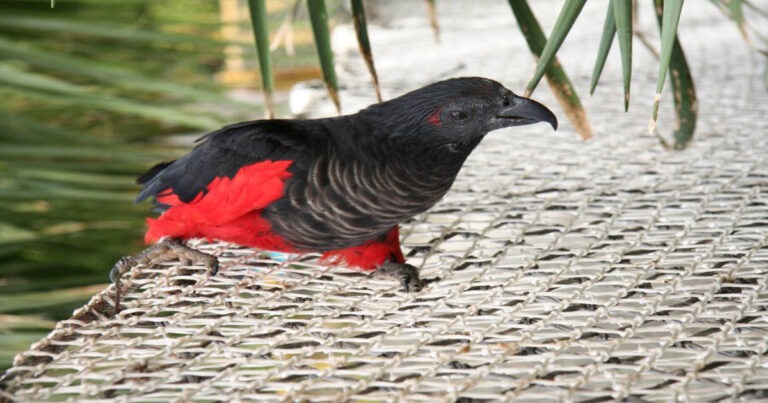 The Pesquet’s Parrot, also known as the vulturine parrot or the Dracula Parrot, is a large bird with a length of approximately 1-foot 5-inches that can weigh as much as 1.8 pounds.

The bird gets its name due to its colors which consist of a black upper-body and a deep red lower-body, along with its vulture-like presence.

The difference that stands between a male Dracula Parrot and a female, is the red spot which is located behind the bird’s eye, which is not seen in the adult female.

Despite its majestic appearance and name, the Dracula Parrot is a highly specialized frugivore, and before it was ever designated vulnerable by Red List, it was one of the most threatened due to its strict diet.

The parrot is one of just three parrots with featherless faces and is thought to of evolved this way to avoid its feathers from matting with the fruit the bird feeds on.

The birds produce unique noises that are sometimes described as growling, unfortunately making them much easier to spot for poachers, and alongside the parrot’s bright colors, they have become a target as their population continues to decrease.

In-flight, the Dracula Parrot tends to alternate between both rapid flapping and short glides and is typically seen in groups of up to 20 parrots.

The Dracula Parrot can be found in rain forests in New Guinea, surrounded by tropical woodland, and live among unique vertebrate species that are local to the rainforests and are found nowhere else on planet Earth.

Papua New Guinea, the country of the bird’s origin, is located in Oceania in the southwestern Pacific Ocean. The Papua New Guinea mainland makes up the eastern half of the island of New Guinea and is the center of the majority of the country’s population, as well as most of its cities.