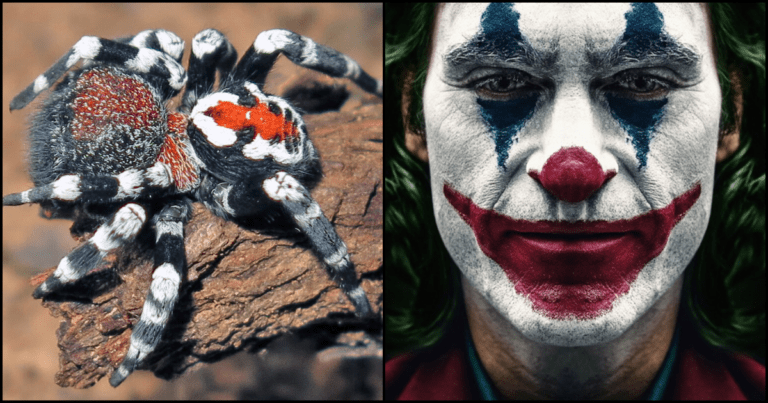 An incredible new species of spider has been discovered, and while there are already 160,000+ reportedly estimated species of the arachnid, this one tends to stand out above the rest.

The new species was found in Iran and so far, only male spiders have been found and identified, but the search is ongoing for any potential female.

Solely due to its red and white markings which have been compared to the Joker’s haunting smile, the spider has been named Loureedia Phoenixi, which pays homage to Joaquin Phoenix’s mentally unstable character from the recent Joker movie.

The spider is fairly small measuring at just eight millimeters in length, but regardless of its size, pictures of the famed pattern justify its Joker-inspired name.

The newly discovered species are said to spend their entire life underground and can rarely (if ever) be found on the Earth’s surface.

Less than a year ago, Joaquin Phoenix gave us an inspired performance where he played Gotham City’s troubled comedian, Arthur Fleck.

Since then, the movie became the first and only R-rated film to hit $1 billion at the global box office, and Phoenix is highly expected to be returning to his role for a sequel, which would be the first time he has done so in his illustrious acting career.

The Puerto Rican actor was handed his first-ever Oscar, which he earned in the ‘Best Performance by an Actor in a Leading Role’ category.

Hildur Guðnadóttir received an Academy Award for ‘Best Achievement in Music Written for Motion Pictures’ while the outstanding Todd Phillips, alongside more members of the crew, was nominated for several more.

Before the worldwide lockdown and social distancing rules were put in place, Joker ‘2’ was reportedly in development, and if you missed the news, you can find it HERE!

What do you think of the newly discovered Joker spider? Can you see the resemblance? Make sure you share your thoughts and opinions with us in the comments.