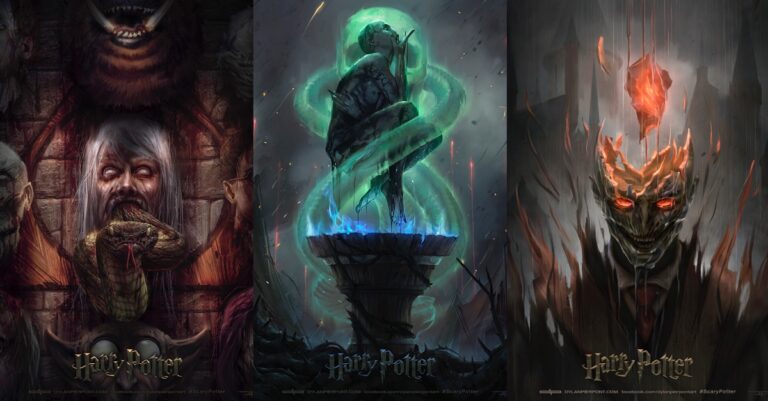 Harry Potter has taken over the entire world and has become a series that has dominated book sales and movie sales. The movies are just as good as the books and have awesome movie posters to get the fans excited. Within the movies, though, there a few good moments where there are some intense jump scares or some dark and ominous imagery that makes fans slightly sit on the edge of their seat. The posters captivate that imagery well, but one artist in particular decided to take it a step further.

Dylan Pierpont, an American digital artist, created some scary and horrifying movie posters of this beloved series. He turned them into a horror show and has renamed the series Scary Potter because of how terrifying the movie posters are. The once ominous movie posters for Harry Potter are now full blown horror shows that is inspired by some of the more dark and sinister events that have taken place throughout the series. These movie posters will blow your mind and will make you want to watch Scary Potter. All we know is if this becomes a movie, we know who to go to when we need the movie posters.

Scary Potter and The Sorcerer’s Stone

This movie poster is downright creepy and intriguing, making fans wonder what this particular movie is going to be about. It’s creepy, scary, and visually appealing. 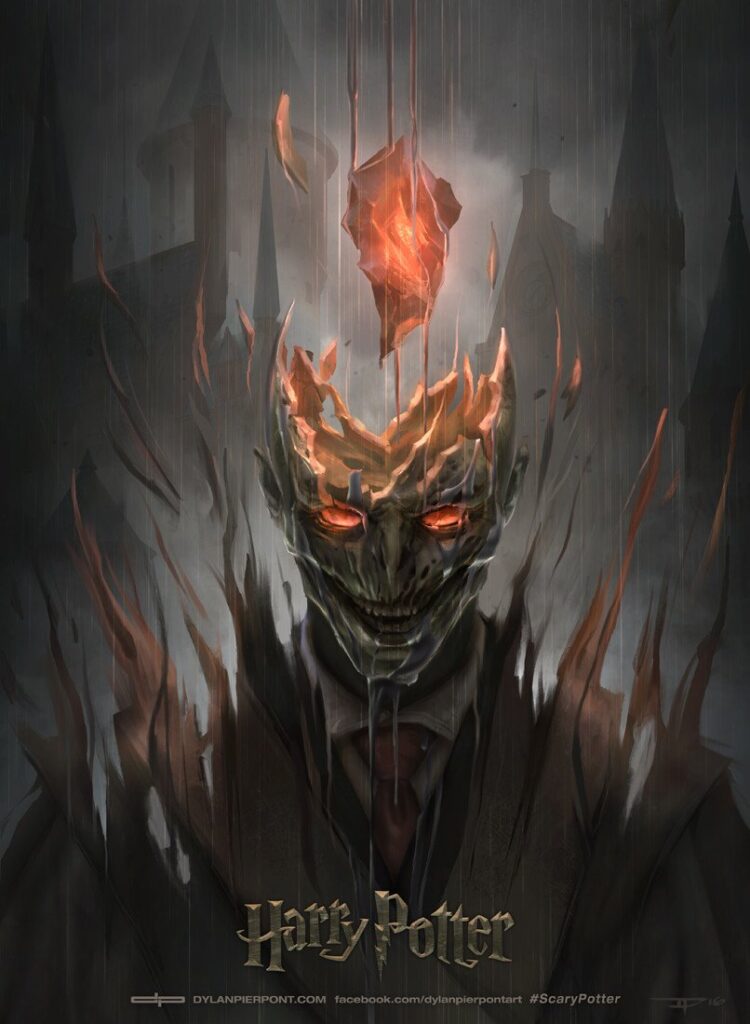 Scary Potter and The Chamber of Secrets

The second movie poster of this series is a little less scary than the first, but it still has a dark and ominous feeling to it. Looking at the poster, it’ll make you question what is the woman doing with that animal and what is going to come of it. 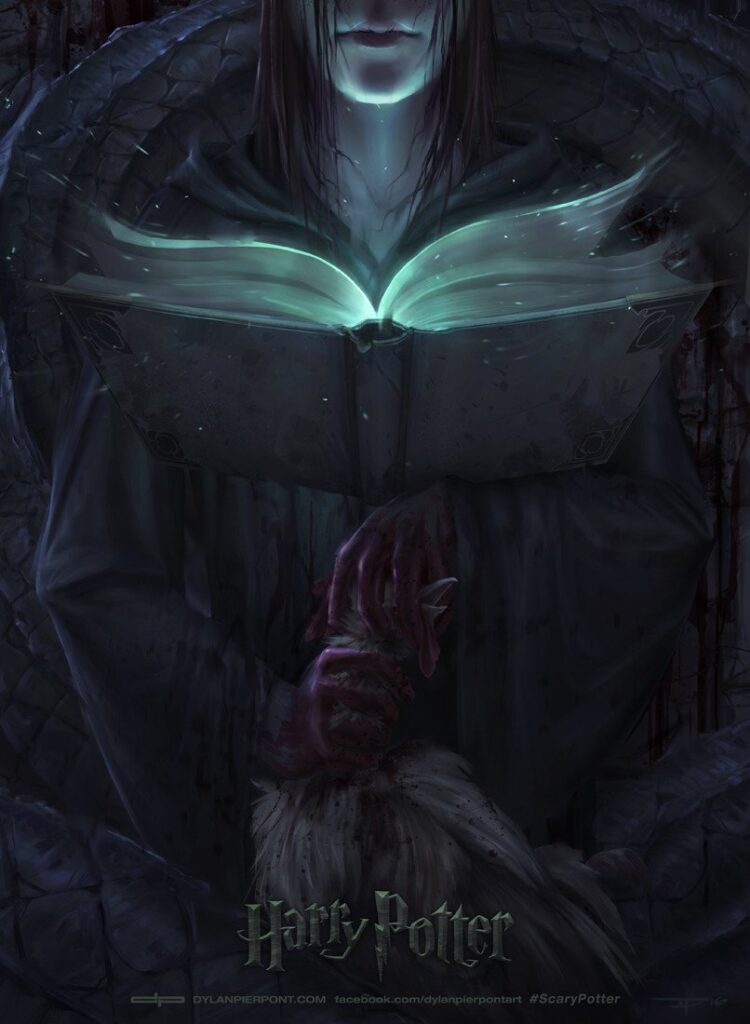 Scary Potter and The Prisoner of Azkaban

With this movie poster, you will WANT to see what happens to the prisoner in this movie. It’s creepy, dark, and makes you wonder what is going to happen throughout the movie. 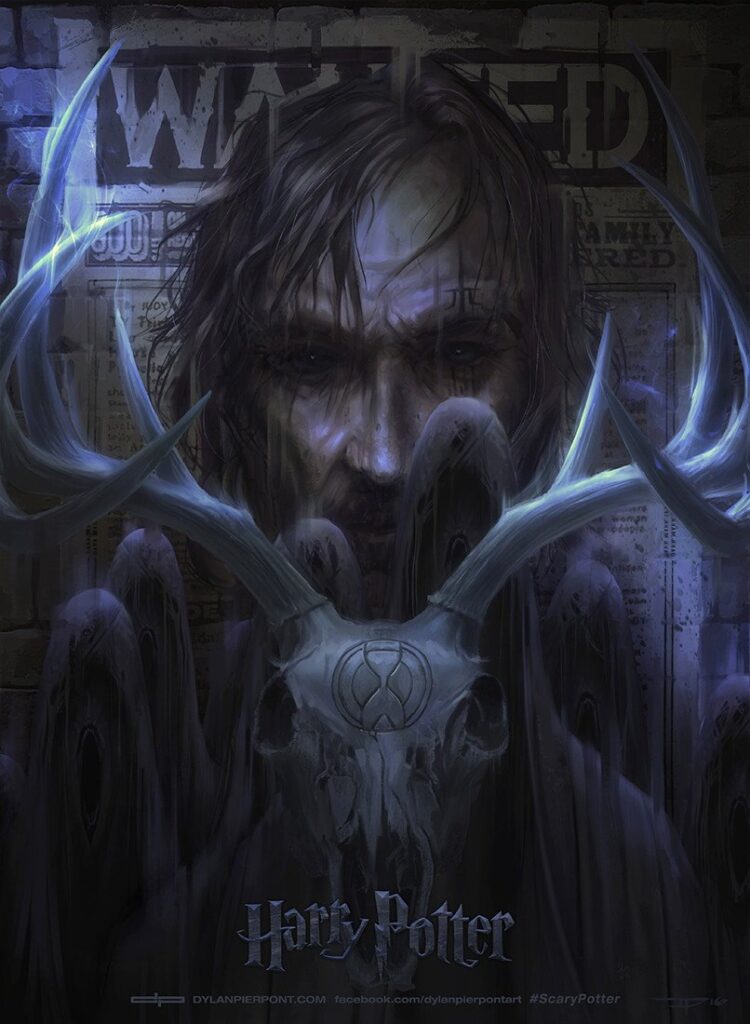 Scary Potter and The Goblet of Fire

This movie poster captured the true essence of He-Who-Shall-Not-Be-Named and turned him into an even scarier character. It’s so visually appealing it’ll make you fall in love with the villain. 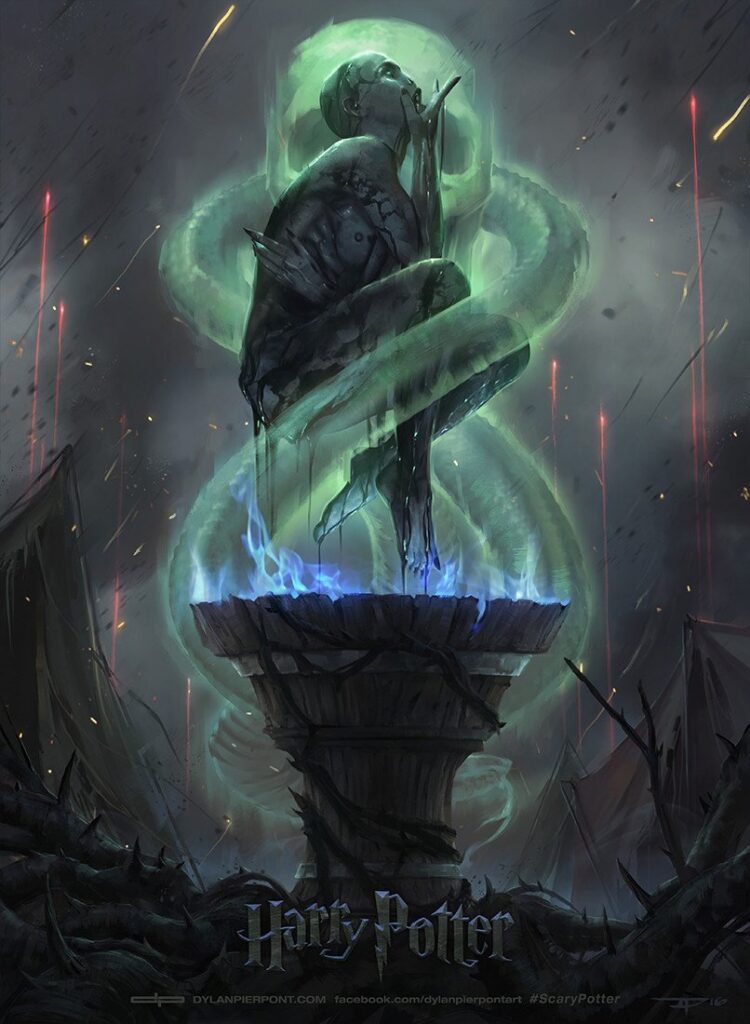 Scary Potter and The Order of the Phoenix

Another dark and creepy movie poster will leave you questioning what the movie is all about. It’s dark and gloomy just like the rest of them, making it form fitting for the series. 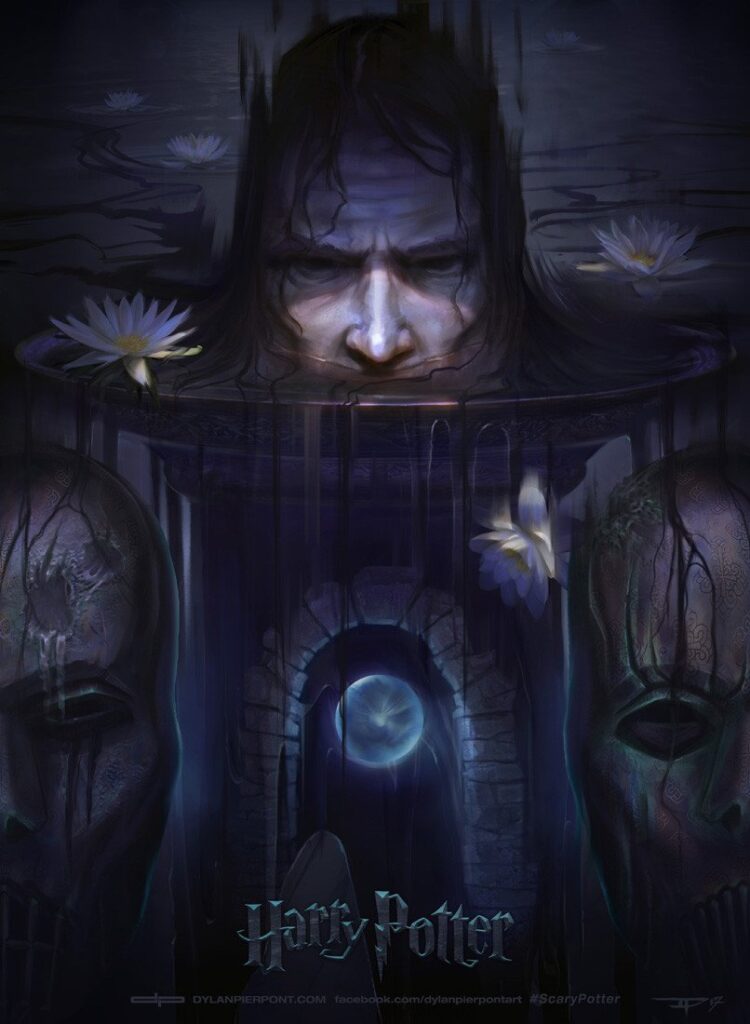 Scary Potter and The Half Blood Prince

This one isn’t as scary as the rest, but it pulls you into the story because of how odd it looks. As you look more at the poster, certain things will stick out to you and will amaze you by how creative Dylan really is. 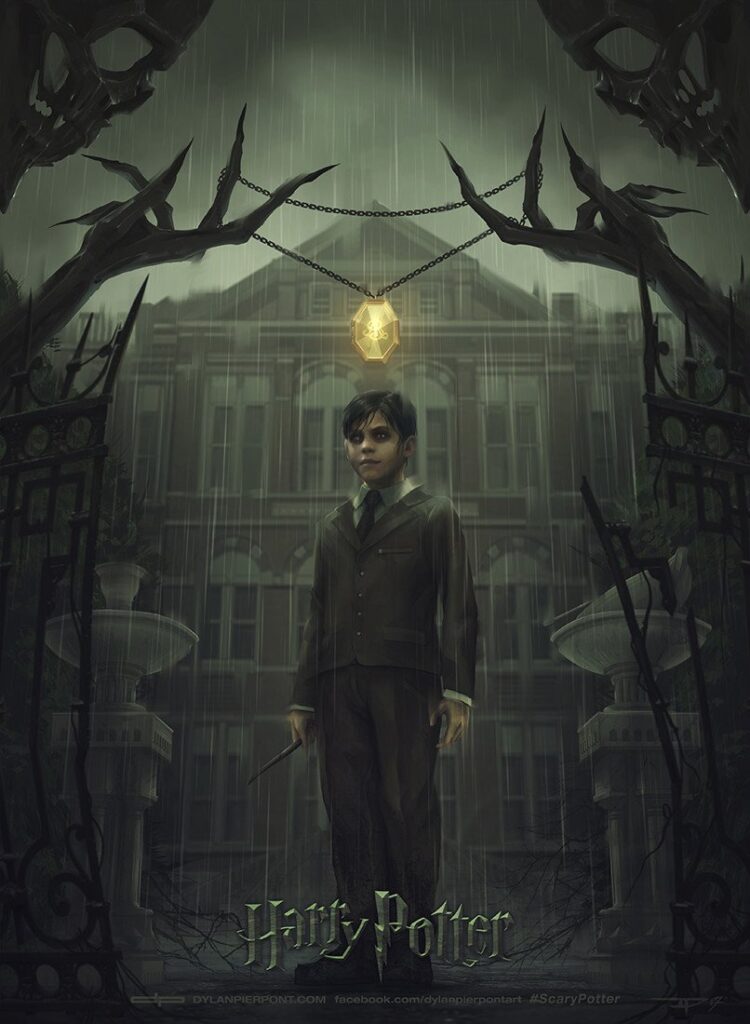 Scary Potter and The Deathly Hollows

Okay, so this one is by far the creepiest out of all of them. It’s somewhat gory, creepy, scary, and captures the true meaning of horror. It’s a poster you’ll never forget. 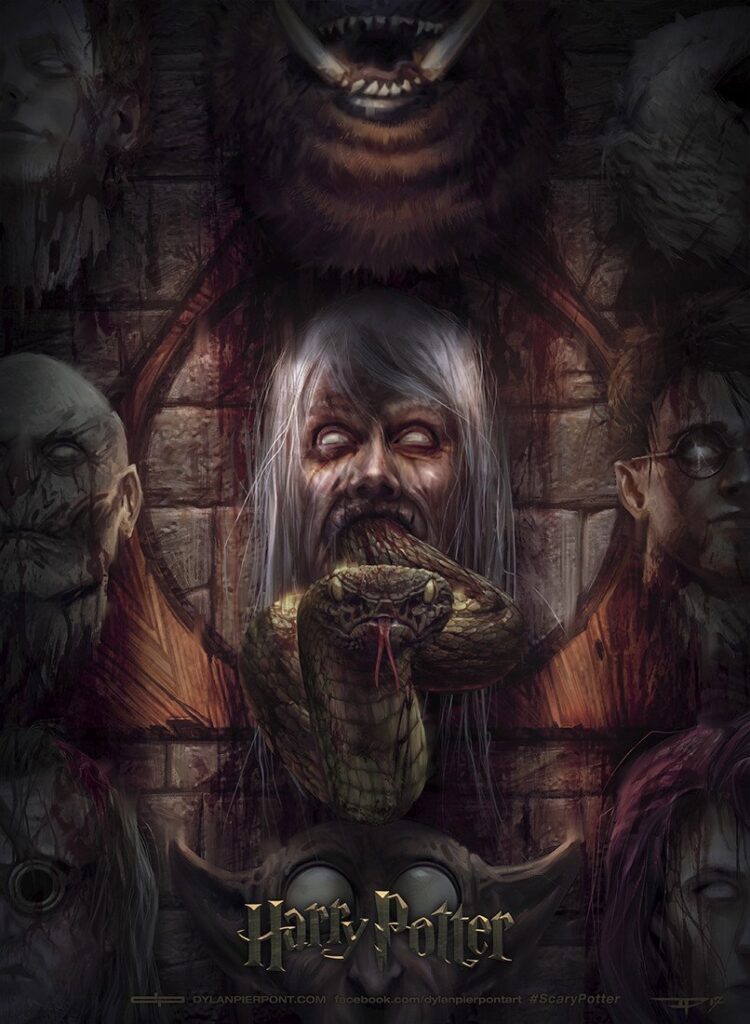 So, what do you think about the Scary Potter series? Do you think it’s one that you can get into and become a fan of based off of the movie posters? They’re so visually appealing and ominous it’s hard to look away from them. They’re truly a work of art! Check out his website, linked below all images, for more art like these movie posters- they’ll blow you away!