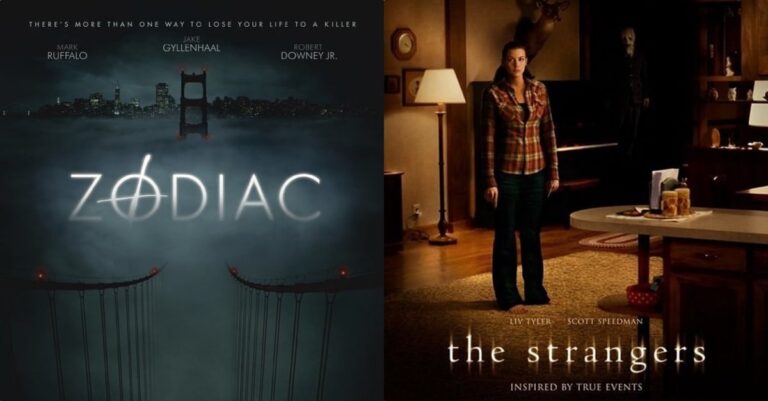 Movies are known to be works of fiction. But what happens when you learn that your favorite horror movie was based on true gory events? Sometimes truth is crazier than fiction. These five movies were based on true crimes committed by real humans. Ripped from headlines, these films were inspired by true tales and incidents.

The Zodiac Killer is the name given to the infamous killer who for years mocked police with cryptic symbols and notes. He is believed to have killed any number of people from 5 to 37 in between the 1960s and 1970s in northern California. His identity remains a mystery and in 2004 the case was officially closed when officials completely rana out of leads. He earned his name from the numerous cryptograms he sent to the San Francisco Chronicle. In 2007, the film “Zodiac Killer” was released starring Robert Downey Jr., Mark Ruffalo and Jake Gyllenhaal.

Female serial killers are not a common occurrence. Aileen Wuornos, a prostitute in Daytona Beach who turned into a serial killer, was one such rare example. Her story was cemented into action film “Monster” released in 2003. She was eventually executed and her track record includes killing 6 men. Charlize Theron, who plays the lead role in the film was awarded a Golden Globe as well as an Oscar for the creepily realistic portrayal she played.

The Silence of the Lambs

The classic 1991 film “The Silence of the Lambs” tells the story of an incarcerated, manipulative, serial killer and his involvement with a naive F.B.I. agent. The story centers round the search for Buffalo Bill, a serial killer who was inspired by Ed Gein, a real killer as well as a grave robber. In 1957, Gein was convicted of killing two women. Exhuming corpses was amongst his slew of crimes as well as the creation of trophies from the dead’s skin and bones. Gein’s acts eventually inspired Leatherface from “The Texas Chainsaw Massacre” and Norman Bates frim “Psycho”.

Easily mistakable for a classic Hollywood tale, Black Dahlia tells the story of a young beautiful woman called Elizabeth Short. She moved to Los Angeles in an attempt to pursue her dreams. However, it was not long before she faced a tragic death. In 1947, she was murdered and her body was found naked and in two pieces on a vacant lot. Her body was severely mutilated and her face had a Glasgow smile etched into it. Her murder remained a mystery and soon her story inspired the 2006 film “Black Dahlia”. The film stars Hilary Swank, Scarlett Johannsson and Josh Hartnett.

“The Strangers” is a 2008 film inspired by three infamous cases of horror: an isolated vacation home whose inhabitants are terrorized by three masked psychopaths, the Manson Family murders, and as the Keddie cabin murders. Each of these true crime stories are horrifying in their own way. By combining them all in one cinematic experience, this masterpiece was born.

There is nothing quite like the thrill of watching true horror films. The thrill of experiencing real life events from a screen is almost akin to being a witness to the real crimes that inspired these tales.