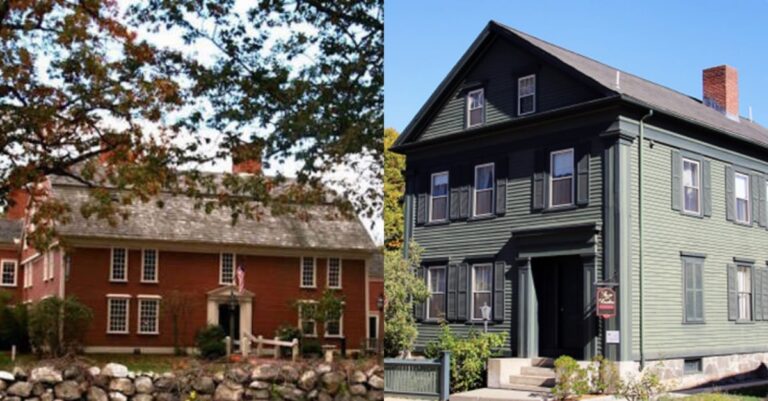 Staying the night at a hotel is meant to be a relaxing experience. Despite that, multiple Bay State hotels contain room whose occupants never really checked out. If you happen to be amongst those in search of a little spook tonight, then these inns and hotels in Massachusetts will not disappoint.

It was first built in 1716 and since then has witnessed a fair share of drama. During the Revolutionary War, it was used as a weapons supplies store. Fallen soldiers were even treated and tended right in the hallways. For years on, guests reported spooky activity taking place through the night. In 1966, one of the tenants, a newlywed, was horrified by her ghostly encounter that she wrote down a letter detailing the incident. On a separate occasion, a tenant of Room 24 ended up sleeping in the hotel lobby on a couch after witnessing a ghost in their room.

Every Massachusetts resident is aware of the story of the Lizzie Borden house. In 1892, Elizabeth Borden was accused to murdering her parents by hacking them to the death with an axe in their home. Although Elizabeth was acquitted of the crime, the home remained haunted forever. Now turned into a hotel, the place is accepting guests.

Given that Longfellow’s Wayside Inn is easily the oldest operating inn of the country, it had plenty of time to garner grim ghostly tales. One of the more popular tales is that of Jerusha Howe, a young woman who passed away in rooms 9 & 10. Male guests who stayed at the hotel frequently reported feelings of warm breath on their skin or occasions of scratching on the door which led to the secret stairwell in room 9.

A Salem landmark and one of the town’s more luxurious accommodation choices, the Hawthorne Hotel has a haunted history. It was built across from the Salem Witch Museum and Salem Common in 1925. Linked to the Salem witch trials of 1692, the hotel experienced multiple haunting incidents. Rooms 612 and 325 are the hotspots for such paranormal activity. Some guests have even reported seeing the ghost of a woman travelling the hallways of the place.

Despite being in downtown Boston, the Omni Parker House did not let the city’s hubbub drive away its restless spirits. The deceased owner as well as resident of the hotel himself is said to dwell in the hallways, scaring guests and tenants. From apparitions to floating light orbs, visitors state that the paranormal activity simple never ceases in this hotel.

The old Wharton estate is not devoid of haunts and scares. Guests report sightings of a woman dressed in white roaming the grounds and halls as well as icy wind drafts in the mid of summer. The hotel also hosts an abandoned antique safe which has not been opened in decades due to the lost code. Surprisingly so, ghosts are far from the only odd spectacle: Leonard Bernstein used to play the piano in the back tavern.

Built in 1853, this inn has a haunted history. A few years ago, the Barnstable House nearby caught fire and firefighters on the scene reported witnessing the ghostly figure of a woman running through the flames. Impish spirits dwell in the Lilac Room of the inn most frequently. Visitors state that they hear odd sounds and feel hands on their bodies. At times, they are even locked out of the room.

This Berkshire hotel appears to be far too modern for it to be haunted. But, guests as well as staff have reported all forms of supernatural activity from disembodied voices to cold spots and the spectral of a woman in the halls. Rumor has it that the spirits were left unsettled after a far older, Hotel Wendell, establishment on the same spot was demolished to build the Crowne Plaza Hotel.

The Salem Inn has a lot to offer in terms of paranormal activity even if the owner turns a blind eye to it all. The inn’s Room 17 happens to be the hotspot for ghost sightings and odd apparitions. The halls are haunted by the ghost of a child and woman named Katherine. The oldest of five structures which make up the inn, Captain West House’s parlor, is haunted by a cat.

Although charming on the outside, the Berkshire estate is chock full of creepy hauntings. The manor which is over a century old is home to a phantom monk. He can be visibly seen roaming the grounds of the estate by night time. The place is not open to visitors and has recently been sold to a non-profit organization.

If you are a resident of Massachusetts or simply are dropping by, it is absolutely necessary to visit or stay at one of these hotels and inns. There is no greater joy than having yourself spooked in some of the scariest spots in the country.