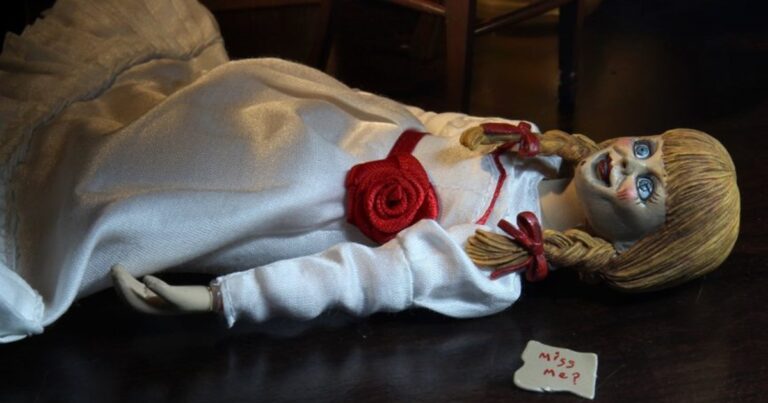 The Conjuring universe has spawned a few well-received movies over the past several years. While each of these have been successful, it’s Annabelle – an evil doll featured in the films – who has taken the horror world by storm. This proved the case almost immediately following the first movie, with the character eventually getting its own spin-off.

Alongside the films focused on the character, she’s also gotten a range of merchandise while also spanning fan art. Now, NECA is releasing a collectible doll that is as creepy as many people may imagine. The doll features a glass box styled similar to the case that The Conjuring’s Warrens used to keep the haunted doll in.

However, that’s only the tip of the iceberg when it comes to the Annabelle doll’s creepy nature. Naturally, a lot of this focuses on the look of the doll itself, which is almost identical to how she appears in the films. What takes this further is that she comes with several interchangeable expressions.

These come in the form of two interchangeable heads, both of which have changeable facial expressions. The first of these expressions is pretty standard for a doll, or a haunted doll, at least. The other one appears cracked, which lends a little bit of extra creepiness to the character.

The overall doll itself is quite impressive. It features all of the details from the version seen on-screen. For example, the 8-inch doll is dressed in a white dress and red rose belt that is identical to its movie counterpart. It’s also poseable, which should mean that buyers will be able to creep out anyone staying over by changing her posture during the night.

The Annabelle dolls are expected to begin shipping in February 2021. However, it’s unclear how much the scale-model doll will actually cost.