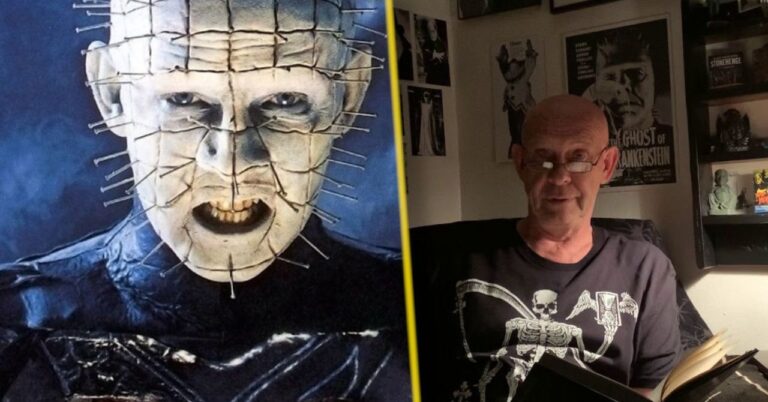 If you’re a fan of Hellraiser or gothic literature, then we have some good news for you! Doug Bradley who is mostly known for his terrifying portrayal of the lead Cenobite Pinhead has started his own Youtube channel where Bradley says he “will read short stories and poetry and share other odds and ends that may be of interest.”. He’s kicking off proceedings with a readthrough of Mary Shelley’s timeless Frankenstein but promises many more videos that may be of interest to fans.

Whereas Bradley isn’t entirely sure on where he would like the direction of the channel to go in the long run he says that “One thing that I do know that I’m going to do and it’s where I’m going to start is reading, simply sitting here in my room reading to you”.

Bradley is one of only six actors to play the same character in at least six consecutive films, joining other greats such as Christopher Lee, Warwick Davis, and Robert Englund.

Bradley introduces the novel as “one of the most well-known, least-read stories in the world” saying that none of the dozens of adaptions on the big screen “actually capture directly the flavor of Mary Shelley’s original novel”.

Originally published in 1818 Frankenstein is still scaring audiences over 200 years later, and hearing it read out loud by Bradley who has some experience in voice acting is strangely relaxing. The introductory video also gives a great insight into Shelley’s history and who she was as a person and an author.

The channel is slowly gathering support with just over 4000 subscribers but if you’re either a Pinhead aficionado, an audiobook addict or are simply looking for something to fill the time, we suggest you head on over to Bradley’s channel where parts 1 & 2 of the Frankenstein reading are available now.