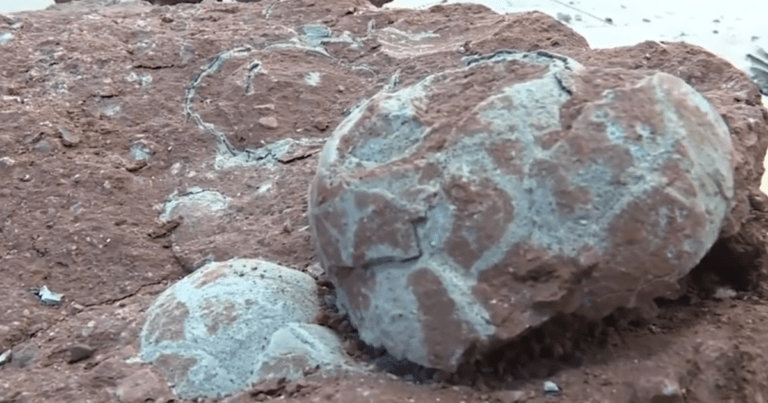 Regardless of your stance about its possibility, the existence of dinosaurs is slowly being discovered piece by piece. Over the years, fossils such as skulls/ bones are continuously bared due to decades of extensive searches and studies by different experts.

But what’s funny is that it can happen in the unlikeliest instances as well that no archeologist can anticipate, much like the story we are featuring here.

This is the story of a young boy and his dinosaur egg. No, this is not Disney’s Pete’s Dragon, where a child goes on an adventure with his giant creature buddy – it’s about a Chinese boy who accidentally discovered an ancient egg-laying around its nest.

Young Zhang Yangzhe was playing near a lake in Heyuan, Guangdong when he tried searching for something that can crack his walnuts open. He grabbed a piece of something that resembled a solidified cement rock, and later on, looked closer to his latest find. He noticed that the cement rock wasn’t a cement rock, but supposedly an egg of a dinosaur.

Zhang was deeply interested in studying dinosaurs so validating his discovery was easy. In an interview with his local media, he mentioned that he “has learned this knowledge about dinosaurs in the cultural corridors of the school, as well as textbooks.” The town of Heyuan was also a popular spot for dinosaur remnant sightings, which makes the probability of the egg belonging to a dinosaur more possible.

When Zhang and his parents began to report the incident to the local museum, experts began to excavate the place of the event. In their operation, they can spot 10 more eggs that seem to be similar to what Zhang found.

And they are indeed dinosaur eggs. According to Huang Ding, the former director of the Heyuan Museum, the fossils “came from the late Cretaceous Period,” which makes it at least 65 million years old.

Thousands of eggs from Heyuan have been preserved. Today, the museum currently houses over 10,000 dinosaur eggs.

What are your thoughts on this 65 million years old dinosaur eggs discovered by a young boy from China? Share your reactions in the comments section below.