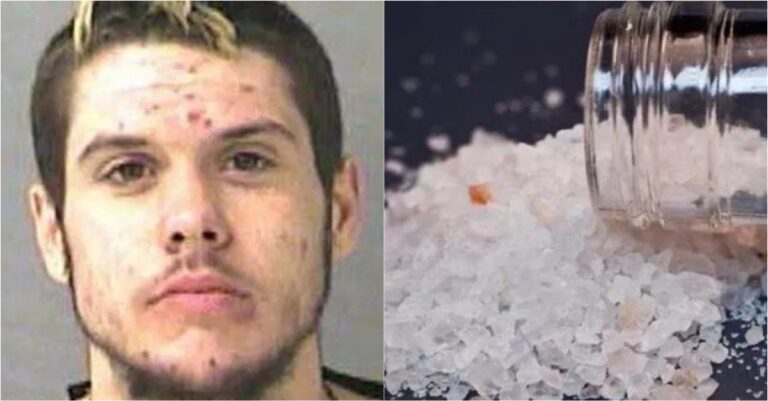 Another new designer drug that makes you do stupid things.

This one however not only makes you stupid but also makes your mental sanity and physical pain almost non-existent. Now the non-existent physical pain part I am not against. I’d rather keep my sanity though. The following people however thought it was good idea to binge on these highly addictive synthetic cathinones.

Flakka and bath salts give the feeling of euphoria to the user that later turns into hallucinations, paranoia and extreme violence. The only way to safely trip on these drugs is if you chain yourself up. And even then you might try eating your leg. Following are some of the most gruesome stories that will make you think twice about doing drugs of any kind.

On the fated day of May 26, 2012, a man named Rudy Eugene decided he was too hungry and started eating another mans face who was also a homeless man named Ronald Poppo. Ronald had almost 75% of his face already chewed off including his face, eyebrows, nose, cheek, his left eye and parts of his forehead.

The toxicology report revealed that he was only tripping on cannabis. However, experts believed that it may have been a new synthetic drug that the labs were not able to test for. Then again maybe he was already a cannibal?

#2 A man possibly raped a goat while tripping on bath salts.

A man named Mark Thompson decided it was a good idea to go on a three day binge of bath salts in his home in Alum Creek. In his haze, he got hold of his neighbors goat and stabbed it in its neck and then apparently raped it. When the neighbors arrived, They saw him wearing a bra and no pants with blood everywhere. Mark ran out the front door soon after.

Kenneth Crowder thought he was the god Thor when he got high on flakka. To top it all off, he also tried to have s** with a tree then attacked a cop. The cop had to catch as he ran in the streets naked. He soon caught up with him but was beaten with his own own badge until the cop managed to handcuff him.

A speeding chase which later turned into a murder and suicide. You see in Spanaway, Washington Army Sgt. David Stewart and his wife Kirsty were caught speeding on the interstate. Before they could get caught David killed his wife and shot himself. The police later found their five-year-old son Jordan dead in their home.

He was presumably killed by one or both of the parents. The toxicology also confirmed that they had bath salts in their system.

In the haze of bath salts 21-year-old Dickie Sanders became convinced that the police was after him. So he grabbed a butcher knife and slit his throat ear to ear in front of his father and sister. Luckily his father was a doctor who was able to stop the bleeding. However, his trip didn’t end there as he shot himself with a .22 caliber by sticking it in his mouth.

Three friends decided to go on a flakka binge for several days and it ended as well as could be expected. Apparently the 30-year old James Heimbach and 27-year-old Joseph Goda flipped on each other after snorting flakka. Heimbach says that Goda tried to eat his face and pounced on him so he defended himself. He doesn’t remember what happened after that.

The third friend however, Charles Yocum told the police that Heimbach killed Goda and then they both rolled the body in a carpet and stuffed it in trunk of Yocum’s mother’s car. Police soon found the putrid smelling car in the East Stroudsburg parking lot.

Stephanie, a 37-year-old mother of two believed that she could breathe underwater after she accidentally ingested flakka which the cannabis was laced with. That is when the paranoia started and she ripped of her clothes and jumped off a three story bridge into the water.

#8 Naked guy on a train bridge.

A naked homeless man tripping on flakka thought it was a good idea to climb up the railroad drawbridge and rode it up in the air. He also seemed quite unfazed by the 115-degree temperature of the metal bridge that morning. He was also quite paranoid and didn’t want to be rescued. After 2 hours however, they were able to get him down.

We actually had to have fire rescue climb up there and basically tie him to the bridge with the firefighters so they could lower the bridge and take him off.

Since flakka makes physical pain almost non-existent 19-year old Nico Gallo ‘canon-balled’ himself through a plate-glass window of his neighbors. Then he started beating her 55-year-old neighbors son. Luckily the woman grabbed a metal bat and was able to subdue him until the police came.

In March 2015, Shanard Neely told the police that he had smoked flakka before he ran to the gate. The police has the footage where he tried to climb u the 10-foot spiked fence and that ended when he impaled himself on one of the spikes. He dangled there for at least 20 minutes until fire rescue team came and cut away the fence.

The spike was removed surgically later in the hospital and he luckily survived.

Leroy Strothers a 33-year-old man decided the best way to deal with his depression was to snort flakka. So in the haze of the drugs he climbed up to the roof oh home and started to shout nonsense. “Someone please call my sister. I feel delusional, and I’m hallucinating!” And with that he put the gun to his head and pulled the trigger.

His suicide attempt however failed and he was charged with possession and discharging a firearm in public.