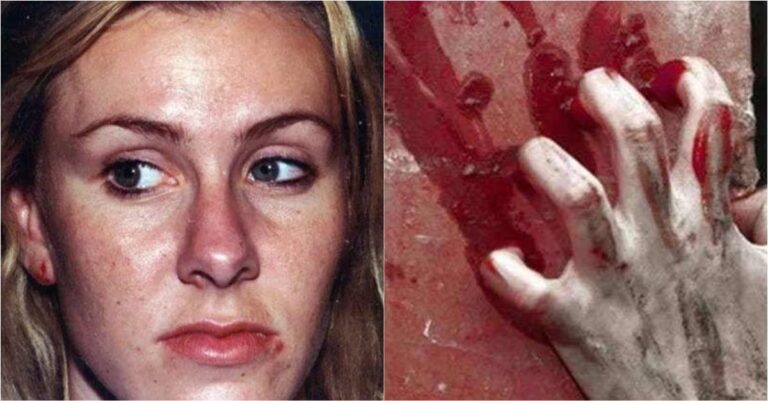 Everyone enjoys a good horror movie once in a while.

That doesn’t mean however that they would like the horror movie to come true. That is however, exactly what happened to the following people. These people have lived through everything from serial killers to stalkers. There is one thing different between these people and horror movies though.

These people used their common sense and resilience even when they were extremely terrified. These are the ten real people that survived horrible terrors and didn’t give up.

Michelina Lewandowska wasn’t too fond of her fiance Marcin Kasprzak. And she was probably anticipating a nasty breakup. However what she got was far from a breakup. Her fiance rather than breaking up with her attacked her with an accomplice. Her bounded her legs and arms before thinking of a way to get rid of the mother of his 3-year-old son. His horrific idea was to bury her alive under a 90 pound tree so she would suffocate.

She however, was not going to give up. So when she woke up gasping for breath. She cut through her bounds with her engagement ring and was able to get out in time before she suffocated. Both of her attackers were sent to prison for 20 years.

You might have heard the name Jeffrey Dahmer as he is one of the most notorious serial killer and he killed and dismembered 17 young men between 1978 and 1991. He did everything to his victims from necrophilia to cannibalism. So he probably wasn’t inviting Tracy Edwards over for just a cup of tea.

Dahmer soon revealed his true colors and told Edward that he wanted to eat his heart. Edwards tried to calm down the killer and after successfully distracting him. He struck him and fled. Edwards led the police to the apartment soon after where they discovered four human heads in the fridge.

Holly Dunn and her boyfriend Chris Maier were having a day like any other when they were stopped by a mysterious stranger. The stranger approached them on a train and asked for money. What they didn’t know was that the stranger was Angel Resendiz, a serial killer that had taken the lives of more than six people.

Resendiz tied both of them up before beating Maier to death with a 50-pound rock. Then he moved on to Holly who he stabbed in the neck with an ice-pick. Then he continued to r*** her and beat her with a wood plank until she passed out. When she woke up Resendiz was gone mistaking her unconsciousness for death.

She testified against “The Railway Killer” nearly 10 years later.

#4 Hiding in the bushes.

One fated day Joanne Lees and Peter Falconio were driving in a van at night through the Australian Outback when a motorcyclist signaled for them to stop. The man informed them that their exhaust pipe was emitting sparks and they should take a look. When Perter got out of the van to take a look the motorcyclist later revealed to be Murdoch shot him.

Then he tied up Joanne with cable ties. He hauled her out of the van where she hit her head. Even though she was bit dazed she used this opportunity to run and hide in the bushes nearby. She came out of the bushes five hours later and signaled the passing cars for help.

Aimee Copeland was always up for adventure so she wanted to give zip lining a try when she was on a vacation. She always loved to try new things. This time however, when she zip lined the wire snapped and sent her plummeting down into the murky water. There she contracted necrotizing fasciitis in an open wound.

It was clear that the flesh-eating bacteria worked fast so the doctors tried their best to stop it. She was saved but her hand and both legs had to be amputated. She was however fitted with biotic hands and prosthetic legs so she could live as close to normal life as she could.

A 14 year old, Elizabeth Shoaf was going back home from school when a man claiming to be apolice officer arrested her and then forced her to come to his house in the deep woods of South Carolina. The kidnapper was Vinson Filyaw, an unemployed construction worker. He chained her up in his bunker and assaulted her everyday for 10 consecutive days.

She however continued to earn his trust and asked for his phone to play games on it. Unsurprisingly, she used it to text her family and friends. The police were able to find then soon after and he was sent to prison for 421 years.

#7 Footprints in the snow.

A redditor laundrysoap had a chilling story to tell of her boyfriends mother. You see, when she was just a child, she lived in house with a very weird floor plan that had a door in every room. She felt that someone was watching her though her parents dismissed it as a childs fear. It got so bad that she would sleep in her parents room everyday.

One day when her father got up in the middle of the night he saw a shadow figure in one of the windows. The next morning he saw fresh footprints in the snow and they led to a house where a mentally-handicapped teen lived. He also confessed to watching his daughter sleep.

Jennifer Asbenson missed the palm springs bus one day which would’ve taken her to a center for disabled children where she worked at. So when a motorcyclist offered her a ride, she happily obliged and safely reached her destination. However, he was there the next day too. Since the ride had gone smoothly the other day, she accepted again.

This time however, the motorcyclist revealed himself to be Andrew Urdiales a serial murdered and he who put a knife to Asbenson’s throat. He drove her out to the middle of the dessert where he gagged her and raped her before forcing her into the trunk of his car. Jennifer however found the release mechanism inside the truck and popped it at the right time before running to get help. Urdiales was captured 5 years later.

A redditer  M1nneapolis has quite a scary story to tell. You see, when she was in high school and getting ready for bed. She heard something out of her window. So, She looked outside to see that it was her neighbor yelling inappropriate things to her. She ignored him and decided not to tell her parents.

The next morning however, he was in her her with an 8-inch knife telling her not to move. Naturally, she bolted for the door and ran asking everyone in their neighborhood for help. The police showed up in time and successfully caught the attacker  who had been planning this for months.

Daniel Hoevels’s had been playing the role of Mortimer in Mary Stuart for 2 years and was quite good at slitting his own throat. So like any other day, when he reached for the knife and slit his throat, the audience was horrified. This time however, the horror was quite real. The knife had apparently been switched!

Rather than the real but dulled knife he used everyday, this was a very sharp knife. He however did not cut any major arteries and was able to survive going back to work the next day. Nobody knows whether it was accident or a failed homicide.