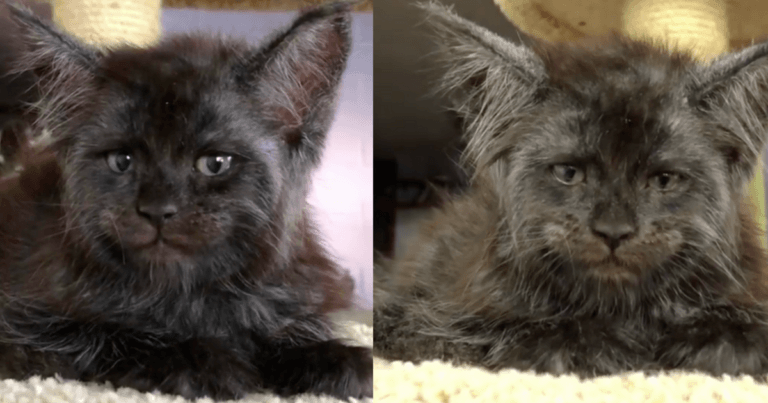 Cats tend to be cute animals that a lot of people like spending time with. While there are few of us that don’t like them, they can still be undeniably adorable. However, that’s before you meet the cat with a human face. Yes, it’s as terrifying as you might think. And unlike what Skyrim might have you believe, it doesn’t have wares if you have coin.

Featured on the Catsvill County Instagram page, the feline’s face seems to have all of the features of a human’s. While you might think that this would make it adorable, it makes it much more unsettling than you might have imagined. Named Valkyrie, the kitten is a Maine Coon, a relatively popular breed in some parts of the U.S.

Despite the popularity of the breed, the cat with a human face still stands out from its cousins. This is especially true when compared to other Maine Coons, none of which seem to have the same facial features. While it’s unclear as to whether the feline has a deformity, it still looks quite different than you’d expect.

Jokes aside, it does seem to resemble the Khajit from the Elder Scrolls franchise, or even the Thundercats. Based on descriptions of the breed online, the human-like facial features are an abnormality. However, the Catsvill County Instagram page doesn’t make any mention of whether there are any conditions that may have led Valkyrie to look the way she does.

As Cattime.com explains about the breed:

“A medium-width head is slightly longer than it is wide and has a squarish muzzle. Large, well-tufted ears are wide at the base, tapering to a point, and large, expressive eyes are green, gold, greenish-gold, or copper. White or bi-colored Maine Coons may have blue or odd eyes. The brown tabby pattern is so common in this breed that many people don’t know Maine Coons can come in any other colors or patterns.”

Regardless, the cat with a human face is enough to give many of us nightmares. Either that, or we’re one step closer to real-life Thundercats.