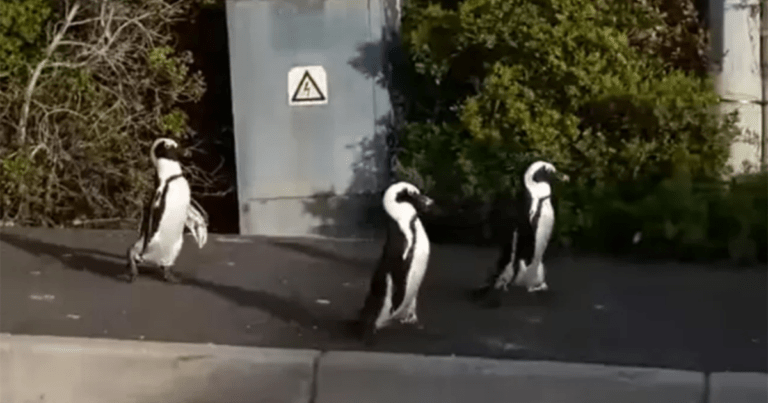 Yet another beautiful report regarding animals has recently surfaced and it seems that the current lockdown, which has been terrible for us humans, is a gift for wildlife.

The African penguin colony attracts thousands of tourists and visitors each year, but since self-isolation has prevented anyone from visiting, these wonderful flightless birds have been bravely venturing through the streets of Simon’s Town.

While it’s not such a rare occurrence for penguins to be roaming the streets of Simon’s Town, there’s beauty in seeing them wander around empty streets in the replacement of human life.

Under the watchful eye of SANCCOB’s (South African Foundation for the Conservation of Coastal Birds) penguin rangers, the birds are free to stroll around town while being completely uninterrupted by noise or activity.

As you can see in the video below, it’s hard not to sit back and smile at just how adorable these waddling penguins are.

After being posted to their official Facebook page on Friday, the video has amassed over 400,000 views and continues to climb as people cannot get enough of these cute little animals.

Unfortunately, African Penguins are an incredibly endangered species, and following the video’s success, the organization has urged people to adopt a penguin egg in attempts to keep the species in existence. If you wish to adopt, you can do so HERE!

Recently, due to the absence of tourists and visitors, wild animals have been spotted strolling and adventuring through places they couldn’t otherwise.

Lions have been caught relaxing in the abandoned roads of South Africa. Yosemite National Park is full of animals, and for the first time in seven years, sea turtles have nested on Pengui