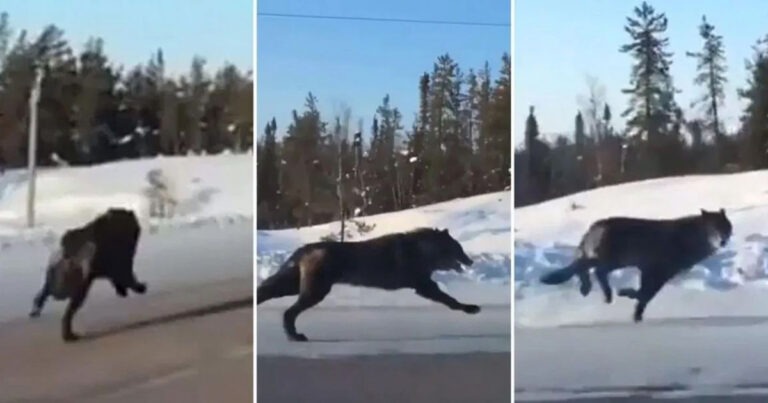 There are plenty of reasons to be afraid of wolves, especially if Liam Neeson’s recent filmography is anything to go by. However, many people would assume that they would be quite protected in a car. Though this may be the case, people may not be as safe as they expect. The main reason for this is that black wolves are quite fast and can keep up with a vehicle.

This is evidenced by a video released on YouTube by a woman driving her car with two wolves running alongside her. Explaining the context, the driver said that she initially saw them in her rear-view mirror. She first thought that they were people because of the speed they were going. Then, she thought they were bears, though it was the wrong time of year to spot them.

However, it was only when they were close that she realized that they were black wolves. As she had slowed down to see what was following her, the animals quickly overtook her car. Knowing that nobody would believe her story without evidence, she decided to catch up back up and video them.

According to the woman, she had to drive between 40 and 50km/h just to keep up with them. Naturally, this is much faster than the majority of people would expect. The woman notes that she’s seen plenty of other animals on that stretch of road in the past. That’s why she first thought that it might be a bear in the distance.

When she finally got close to the black wolves, she was shocked by just how big they are. This is especially true about their heads and jaws. Being meat-eaters, the wolves certainly have quite a large and powerful jaw. Naturally, they’re not something that anybody would want to run into in the wilderness. Just ask Liam Neeson.