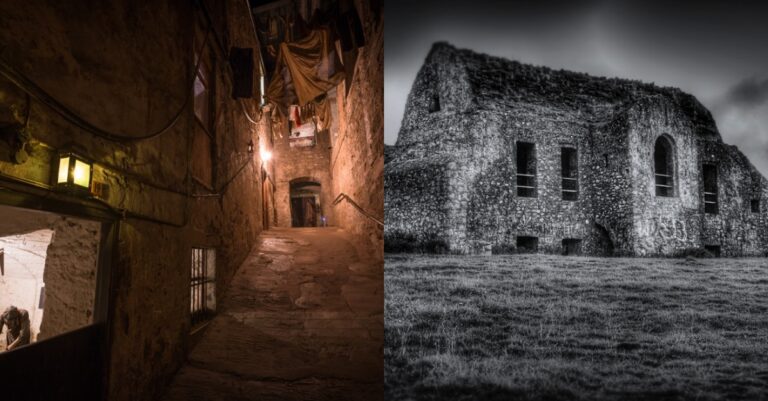 Anyone you speak to about the supernatural or the paranormal, you are most likely to receive a reply that will end your argument, “There are no such things as ghosts!” and this reply has, in fact, become stereotypical. It can be considered viable that due to scientific advancement, all the superstitions about evil spirits and evil diseases have been revealed to have a valid scientific reason and hence there is no need to fear such fallacies. But what theory will explain haunted places, an unnatural phenomenon occurring at nights in a house left abandoned, supernatural entities being reported by people more than hundreds of times in a year? Science has never given a clear answer on whether supernatural entities exist simply because it cannot admit things that cannot be comprehended scientifically by the human mind. Nevertheless, it is proven over and over again that places do have a haunted side and there is a factual reason why people around such a place fear it. Such places exist all around the world and have been shortlisted into the top ten most haunted places on earth. Have a look! 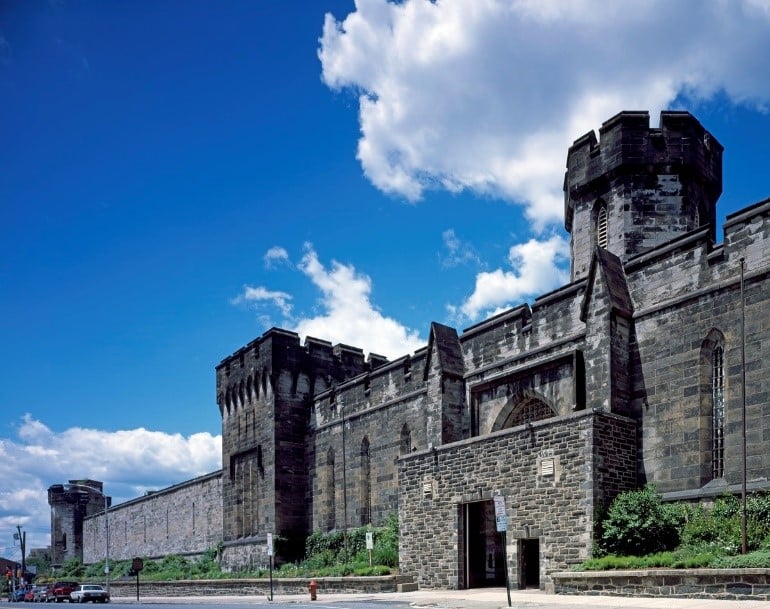 Source: Pinterest
The Penitentiary was built in 1829 as a prison. It was also known as the Pennsylvania System and it was the first of its kind; it had solitary confinement. The prisoners would be separated completely from the outside world and from any kind of contact with a person. They would live alone, eat alone, and sleep alone until their rehabilitation had ended. Due to this punitive and somewhat malevolent “treatment”, prisoners would go insane. This System was then changed to just an ordinary prison in 1913 and remained active until 1971 when it was abandoned. Reason being that during the 1940s, numerous sightings of paranormal activities began and as the place was abandoned in 1971, these bizarre activities grew. The most common paranormal encounters include the following:

Source: Pinterest
The Hell Fire Club is famous for numerous animal sacrifices, murder and slaughter, black masses and cloven-hoofed men. If you visit Ireland someday, you are likely to hear eerie tales about the Hell Fire Club. It used to be a dwelling for devil worshiping and debauchery. It was built originally as a hunting lodge in 1725 but gradually became a gathering place for Dublin elites. 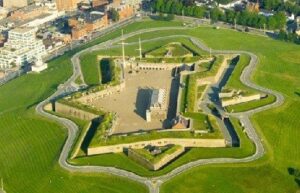 Source: Pinterest
The historic Halifax Citadel is the most haunted site of Canada on the record, having hundreds of reports of mystic ghost sightings especially since it was reconstructed in 1856. It is known to be 270 years old and full of demonic entities itinerant in its halls and corridors. The pressure is immense for someone who visits this place since there is always a feeling of being watched by the unknown.

Since the staff knows this place more than any other people, their reports are certain to be true and what they say about the Citadel is exactly what visitor experience during their tours. A common encounter is that a soldier in uniform walks into one of the rooms and when he is noticed, he simply vanishes. A little girl is often seen following the tourism groups around the Citadel.

However, the most fearful of all is the feeling of being watched. If one is alone somewhere in the place, they are most likely to have an acute panic attack because apart from ghostly appearances there are also demonic entities and the feeling is very terrible once such entities are around; the temperature falls, foul smells of dead rats and rotten eggs and the feeling that something is there even though nothing can be seen. Door banging, screams, furniture moving across the rooms, sudden flurries of air and numerous other supernatural activities are present right in the Citadel. 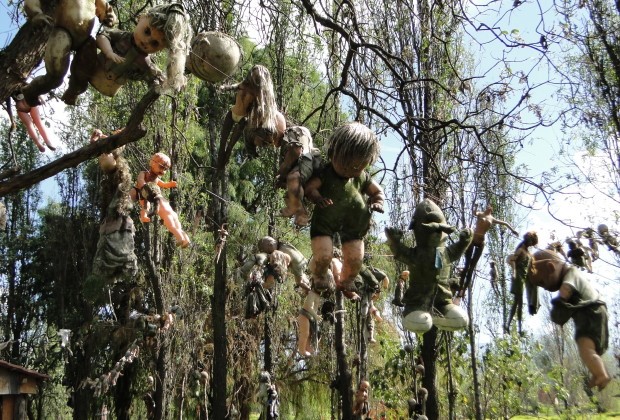 Source: Pinterest
If you think you might have heard of this place before, yes it does exist. It can be found on Teshuilo in Xochimilco near Mexico City. It is known in Mexico as The Island La Isla De La Munecas. It is famous for being one of the strangest and most haunted islands on the planet. Mentioning the obvious, the island if full of creepy dolls hanging from trees and they have a very intriguingly creepy story behind them.

The story begins in the 1920s when three young girls were playing nearby the waters and one of them accidentally drowned in the dark waters. It is believed that the girl’s spirit got stuck to the island since her death and has been haunting the place ever since. Even the local are afraid of entering this zone because of the frightening sighting. Around 1954, a Man name Julian Santan Barrera moved to this Island being unaware of this place’s murky history. According to Julian, he used to speak to a little girl; the spirit of the dead girl. He used to sell vegetables and fruits to buy dolls for the girl. As days went by, the thirst of the girl for these dolls intensified. This became a grim apprehension for Julian because the girl started liking not only dolls but also him and wanted him to stay in the waters with her, so he told his nephew. When Julian’s nephew came to see him on the Island, he found his dead body face down near the girl’s own dead body, which was 70 years old.

Today tourism claim to see a girl walking in the place and doll’s eyes following them.  The dolls are exceptionally creepy and “mutilated” which whisper to the tourists in disturbing voices.

Source: Pinterest
This fortress in a medieval castle which was built around 1300 AD. It used to be a stronghold of the Oslo city. Then in the 18th and 19th centuries, it was transformed into a prison; many of the prisoners had lifetime sentences and they died right in their cells. So much so, even the Nazi’s captured the place during World War II and carried out executions in this place.

Without a doubt, it is the most haunted place in Norway and the locals speak of many ghosts haunting the place. Its history is so ancient that no one dares walk alone in its boundaries. Most popular tales are about a demon dog named Malcanisen that is believed to guard the gates of the Castle. Anyone who is approached by this hellhound is killed in a malicious manner under three months, according to the legends. 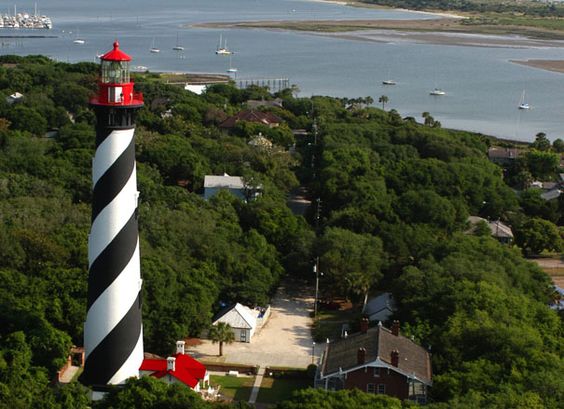 Source: Pinterest
This is a fully functional lighthouse as well as a museum in St. Augustine. The lighthouse along with the surrounding buildings have been known to be haunted for decades. Most famous sightings are of two girls who are believed to have died during the construction of the lighthouse in 1974.

A woman is also seen standing on the stairway. She usually cries out for help in a faint voice. Like all other haunted places, disembodied conversations, shadowy figures and sounds of windows and door banging can be heard here.

Source: Pinterest
Considered as the most haunted hotels in America, the Queen Mary is an expired ocean liner which used to sail the North Atlantic from 1930-1960s. Then in 1970, the liner became a famous hotel in Long Beach, California.

It has so many eerie places that it is hard to understand how to start telling about them. Most famous are the two women who drowned in the first class swimming pool in the 1930s and in 1960s. Cabin B340 is famous for the supernatural activity going on inside.

Source: Pinterest
This place is truly a sinister place, by all means, and perspectives. Mary King’s Close is an underground habitat of streets which was originally a very flourishing trade area. In 1645, the place was abandoned due to a plague ending all trades. The infected ones remained isolated in the underground dwelling until they passed away.

The haunted part of its history begins in the 17th century when paranormal entities started being spotted in Mary King’s close. It is now a famous tourist spot renowned for the numerous legends about it.

The Coltheart family used to live here in the 1680s and they were the first to encounter the supernatural ongoing in the place. They moved in as soon as the plague ended and the family members used to see disembodies limbs and horrible figures especially at night. Anyone who lives here gets atrocious nightmares. 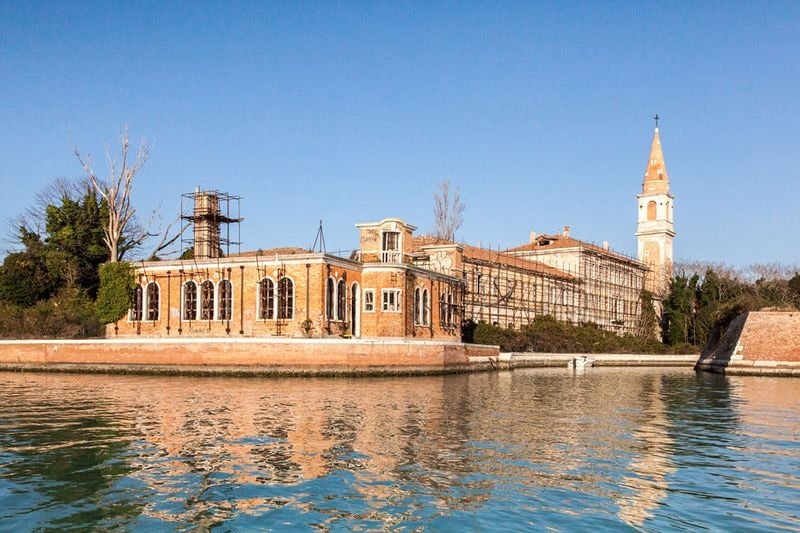 Source: Pinterest
The island resides in the Venice Lagoon. This place was inhabited in 421 AD. As time went by, the local people gradually left and abandoned this place and in the 14th century, not a single soul was in this place. The reason is believed to be the Bubonic Plague outbreak. Many Veterans have their dead bodies in here. In 1630, the Black Death wiped out the population in this place. Then in the 1800s, this place became a mental asylum. It is believed that the patients were ill-treated and horrifying experiments were performed on many of them.

Today, this island is abandoned and avoided by the locals because they believe the vengeful spirits of the doctors and the patients haunt this place. 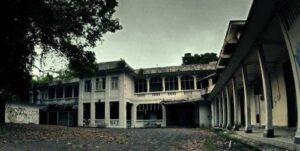 Source: Pinterest
Moving to Asia, the Old Changi Hospital is an abode to the restless spirits of numerous people. It was built in 1935 to serve a military base. It was later occupied by the Japanese and was used notoriously as a prison and torture camp. Today, this building is full of ghosts of its past; Japanese soldiers who were executed and patients who died. Natives say that anyone who visits this place hears dreadful screams and physically encounter the dead. The place qualifies to be haunted by all means.

Sometimes haunted places are a just haunted because the locals say they are. Or because a big brother scares off his little brother by portraying a certain grim building to be haunted. There are many such cases all around. But these ten places are not to be considered this in this case. Their wicked past is as real as the building itself and the evils that haunt the building reside in the realm of reality.

Haunted places are not to be taken as witticism for attention or fame. Something will take its vengeance on it feels it is been mocked or its story being falsely and humorously told. These places deserve some grave attention and the spirits of the victims inside want their untold story to be understood. The demonic entities want to ferociously possess a soul and they are just waiting at the doorstep, luring you inside so that you can forever become a part of one of the most haunted places in the world!