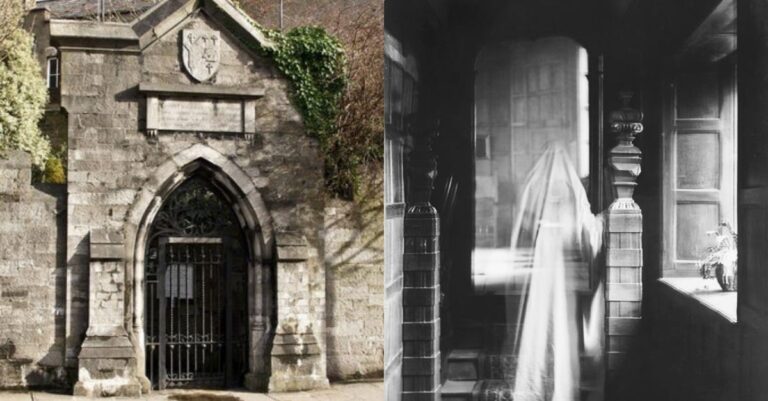 Libraries are places or wonder and mystery. The obscure and ancient manuscripts that fill every nook and cranny make for the best places to hideaway. Such a hushed environment makes for the perfect spot for spirits and phantoms to bid their time. There are plenty of libraries around the world full of mysterious tales. But, then some libraries are just occupied by the dead.

The State Library of Victoria, Melbourne, Australia has been a hotspot for paranormal activity since the mid-19th century. Among the more frequently noticed is the spirit of a former librarian named Grace. Her presence is a kindly one and she attempts to keep dangerous specters at bay. One such dangerous specters is a poltergeist, who relishes in the torment of library patrons and staff. Grace’s spirit always attempts to thwart the poltergeist’s efforts but cold spots, glowing light orbs and strange noises are still a common occurrence.

Another frequenter of the library is the ghost of a 19th century well-dressed man who sports a curling mustache. He lingers in the music department more and frequently pulls out books from shelves and leaves them in a mess on tables.

In the Russian culture, Baba Yaga is the most wicked witch. She flies in a mortar and pestle through the skies and has a craving for human flesh. She also has a house that has chicken legs. According to legen, Baba Yaga was birthed in the village of Kukoboi. Hence, it makes sense that she haunts her hometown’s library. The library staff has reported witnessing a ghostly lady donning an old-fashioned bonnet who appeared out of nowhere and conversed with people. Then she disappeared as suddenly as she appeared.

The University of San Diego’s Copley Library is haunted by a spectral nun who wears blue clothing. No one really has a clue as to who she is. She can be seen bustling about, floating near the balcony of the reading room and flitting between racks.

A Mysterious Figure Appears In Photos Of An English Library

Near Cheshire, England, ghosts dwell in the library at Combermere Abbey. The ghost in question is believed to be that of Lord Combermere himself. He died in 1891 when a horse-drawn carriage ran him over. Once reports of possible ghost sightings were reported by the Abbey staff, a photographer set up a camera in the library. It was left open for an hour.

The staff were all at Lord Combermere’s funeral and no one could attest to have been involved with the photography. However, once the film was developed, a ghostly figure could be seen seated in the Lord’s favorite chair.

The Specter Of A Burned Woman Stalks An Elementary School Library

In the Bellwood Elementary School in Nebraska, young students must tread carefully in the library. Reports of mysterious cold spot and terrifying noises can be heard. The specter of a burned woman is seen at the window, a look of anger and desperation on her face. Additionally, ghostly figured are seen roaming the corridors near the library at night.

The Old Bernardsville Public Library in New Jersey is said to be haunted by the ghost of an 18th century innkeeper’s daughter. In the days of the Revolutionary War, the building was the Vealtown Tavern. Young Phyllis Parker and her father ran the tavern. Her boyfriend appeared to be in support of the revolution but in reality was a spy working for the British. He was soon captured and charged and later hung. Then his body was taken in a coffin to the Tavern and laid before Phyllis Parker. Experiencing trauma and heartbreak, she never recovered from the tragedy. Years later she died in the innkeeper’s quarters.

Although the building was turned into a library, Phyllis’ spirit still lingered. Reports of her wails and screams can be heard in the place. She is such an active presence that the library staff have officially issued her a library card.

A Ghost Asks For Chocolate At A Campus Library

In Manila, a university’s library is haunted by an odd specter. On one occasion a young student was seated at a table and reading the daily newspaper. She had brought a snack with her. She was approached by a young man who inquired what she was eating. She responded by saying “Chocolate. Do you want some?” He did not give her an answer, and instead left – by passing right through the solid wood table.

In Evansville, IN, a ghost known by the name of “Gray Lady” haunts the Willard Library. She was first sighted in the 1930s by a custodian but ever since she has appeared to a number of other people, too. Visiting lecturers have seen her and even policemen who were called late night because of an alarm going off.

Those who witnessed her claim to experience odd sensations when she is around from smelling the scent of strong perfume to feeling ghostly touches and heard odd noises. Cold spots are also a common occurrence when she is around. Furniture is moved around and books happen to disappear. Her identity is not known and every October, the library holds a ghost tour in her honor.

A Vancouver lore talks about a young couple who were driving through the University of British Columbia campus in the 1960s one evening. With intentions to visit the library, they got into an argument on their way there. The argument heated up to the point that the woman left the car and went out in heavy rain to hitch another ride to the library. The car she flagged down didn’t see her and instead drove right over her. She died instantly.

Residents of the campus claim sightings of her ghost around the library and on the path she took. They also note that she still flags down male motorists. Sometimes she will even hand then a note with the library’s address on it and at time she even climbs into the back of the vehicle only to disappear moments after.

Temperatures Plummet In A Library Built On Cursed Ground

In Peoria, IL, long before the Peoria Public Library was built, a house stood in its place. Mrs. Gray owned the property in the 1830s. Hard times left her unable to pay the mortgage and she was evicted. It is said that she left a curse behind on the house and all those to ever own it. Surely enough, every owner after her experienced bad fortune after moving into the house.

In 1894, a library was built on the land where the house previously stood. Mysteriously enough, the first three of the library’s directors died unexpectedly. Then in 1966, the original library was torn down and another was built in its place. However, the creepy occurrences continued. From cold spots to disembodied voice, some people even claim to have seen the ghost of one of the library’s dead directors.

A Librarian Haunts The South African Library Where He Committed Suicide

In Kimberly, South Africa, the Africana Library is rumored to haunted by the ghost of one of its employees. Build in 1882, the city was able to hire a credentialed librarian in the early 1900s. His name was Bertrand Dyer. Although qualified, he took to fraudulent means to run the business. He would order books but inflate the price list presented to the city for payment. He kept the extra money. Soon enough his fraud was discovered and he was ashamed to the point that he took his own life.

He ingested cyanide but it took 3 days of suffering to fully take to effect. He died in the very library he worked in. Today, the library has been turned into a museum. Visitors report seeing a man dressed in Edwardian attire, floating in the halls of the building. Some have claimed to see him rearranging books and even knocking out a book from the shelf if someone is having trouble with it.

A Ghostly Dying Woman Lingers In A Library’s Basement

In Pendleton, OR, in the Umatilla County Public Library, the spirit of Ruth Cochran, an assistant librarian in the 1940s still lingers among the living. When she was still alive, she was responsible for closing up every day. One evening, she experienced a severe headache which caused a cerebral hemorrhage. She found herself unable to move or make a sound. She was found the next morning, still conscious yet paralyzed. Although rushed to the hospital, she died soon after.

Shortly after, the library staff started witnessing odd occurrences in the library. Paranormal activities emerged and they were attributed to Ruth’s spirit.

A Headless Ghost Floats Through A Castle Library

In northern England, Raby Castle has stood for over 600 years. The powerful Neville family ruled in it for centuries. However, in 1569 after the Tudor forces defeated them, the castle became the property of the crown. Sir Henry Vane the Elder purchased it in the 16th century. His son, Sir Henry Vane the Younger, soon incurred the wrath of King Charles II, and in 1662 was publicly beheaded. The castle is known to have become the home for Sir Henry’s spirit.

An Irish Library Founder Still Searches For A Lost Letter

In 1707 in Dublin the Marsh’s Library was founded. It was also the first public library in Ireland. The Archbishop Narcissus Marsh who founded it is thought to haunt the library now. Rumor has it that his niece fell in love with a sea caption and disappeared with him to elope. When she vanished, she left behind a note for her uncle, pleading for forgiveness. However, the letter was never found by the Archbishop. People say his spirit returned to continue the search for it.

In Surrey, England, in Farnham town there is a library that is haunted by a king. In the 17th century, King Charles I had lost a civil war and was hence sentenced to death for treason. He was held at Vernon House, where the current Farnham Library stands – until he was taken back to London and beheaded.

Apparently, Charles’ spirit came back and haunts the site to this very day. Visitors and patrons to the library have reported seeing him, though his head appears to be intact.

Stories of scary libraries may not have been passed down generations like the average ghost story. But, trust me when I say they make for far more terrifying tales than the ordinary ones. The disembodied voices and the apparitions accompanied by shifting cold spots are all the perfect ingredients for a chilling ghost story.