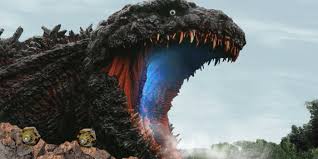 Ever wanted to try your hand at fighting a full size Godzilla? Well now you can! Sort of.

A theme park in Japan has revealed plans for an interactive attraction that will feature a full scale model of The King of Monsters (or at least his head and shoulders as much of the creature will be submerged below ground).

Fans of the giant latex lizard will be able to stand face to face with the Shin Godzilla incarnation of ‘Gojira’, enter through the mouth and actually explore inside the massive monster the premise of the attraction being that groups will enter Godzilla’s body and participate in challenges and activities aimed at subduing the movie muto.

‘Chief Godzilla Officer at Toho Co’. and owner of possibly the world’s coolest job title Keiji Ota said of the proposed 55 metre long structure that it would have a “huge presence” as 20 metre high structures tend to.

Ota also promised that the attraction would have a ‘tremendous impact’. Just like the creature upon which it’s based then.