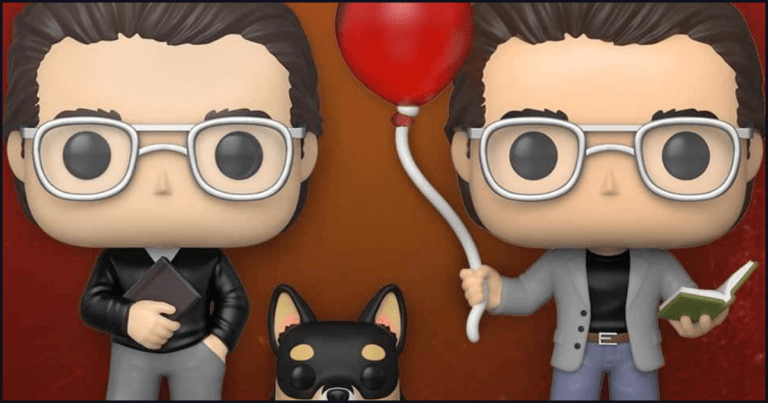 Funko goes above and beyond when creating their unbeatable little collectibles, and while fans can get themselves a catalog of horror POP! figures, they could never add a miniature Stephen King to their collection, until now.

Funko has decided to add to their Funkoween event by releasing a whole new line of figures, solely dedicated to the King of Horror himself, Stephen King.

Holding a book and the infamous red Pennywise balloon as seen in IT, Stephen King is accompanied by Molly. While King is responsible for the creation of many twisted and incredibly creepy beings, Molly remains one of the most frightening in the list.

Amazingly, the POP! figures will be obtainable for just under $15, meaning you can have one of the most influential real-life horror creators sitting patiently in your collection alongside the rest of your horror memorabilia.

Rumors are claiming that the bite-sized Stephen King figures could arrive nearing the end of the year, with an October release date being the most likely scenario.

If you’re interested in purchasing one of these must-have figures, you can pre-order them from BAM! (Books-A-Million) where it is being sold exclusively.

You might find it ships a bit faster going to Entertainment Earth is you just the if you are not looking to buy the balloon Pop! ($10.99)

Excited to see more horror-themed POP! figures? Check some other iconic characters from the movie genre down below.

The Hocus Pocus collection and the new Beetlejuice POP! figures are two of the more recent horror releases made by Funko.

The more light-hearted horrors/thrillers collaborating with the toy creators are, Edward Scissorhands, The Corpse Bride, and an extremely hauntingly cute selection of mini Funko’s from The Nightmare Before Christmas.

Will you be fighting to get The King of Horror into your collection before the inevitable ‘sold out’ stage? Who should be the next fictional or nonfictional being to be converted into a compact figure? Make sure to let us know your thoughts in the comments.