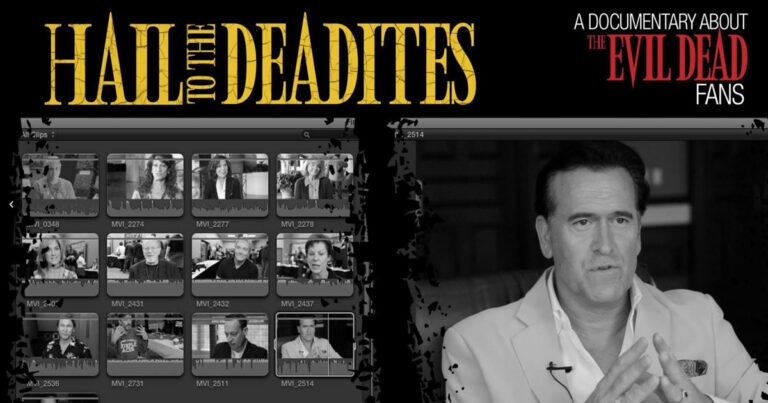 Hail to the Deadites, a documentary focused on hardcore fans of the Evil Dead franchise, is getting its world premiere next month. Announced for the Fantasia International Film Festival, the movie looks to explore the intricacies of the franchise’s still growing popularity. It includes interviews with fans and movie collectors, alongside the cast and crew involved in the first film.

Since debuting in 1981, the Evil Dead franchise has spawned four films and a television series, alongside comic books and action figures. It’s also been referenced in countless other films and TV shows, as well as being parodied extensively.

Alongside featuring fans, Hail to the Deadites includes interviews with lead actor Bruce Campbell. Betsy Baker, Ted Raimi, Kassie Wesley DePaiva, Sarah Berry, and a host of other well-known names in the franchise also appear throughout the movie. As such, it looks to explore what made the films so unique, especially when it comes to the original Evil Dead.

The film has been in production for the past seven years, with the Fantasia International Film Festival set to be the first time it’s being shown publicly. However, the ongoing pandemic has meant that the festival has decided to go online instead of being held in person. As a result, the majority of films set to premiere at the festival will make their way to Fantasia’s website for a limited period.

While Evil Dead fans around the world would think that this would give them a chance to see the film, that’s unfortunately not the case. Instead, the film will be geo-locked for Canadian audiences only, which means fans from outside of the country won’t be able to see it.

Developed and produced by DiggerFilms, Hail to the Deadites is set to stream on the Fantasia website between August 20 and September 2.