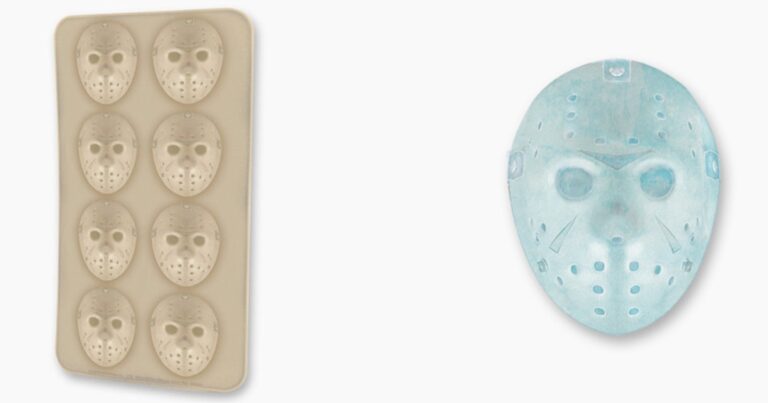 Friday the 13th’s Jason Voorhees is one of the most iconic characters in horror, if not film, history. While adventures in space may have dented his reputation slightly, he’s still one of the most terrifying characters to hit the big screen. With or without his instantly recognizable mask, Voorhees strikes terror in anybody who lays their eyes upon him.

However, that hasn’t meant that fans haven’t looked to get as much merchandise associated with the character as possible. From t-shirts and other clothes to masks, there’s little that hasn’t been plastered with his face. One thing that many people haven’t thought of, though, has been putting him in a drink.

While a lot of this could be because of how he originally died – he did drown in Crystal Lake, after all – there’s also been somewhat of a lack of creativity behind much of the merchandise. With this Friday the 13th Jason Voorhees ice cube tray, however, you’ll be able to terrify your friends with nothing but a drink.

Naturally, having the character’s icy face coming out of a drink will be a surprise to the majority of people, which should help add to the fear. Made from rubber, the ice cube tray includes eight of the character’s iconic masks to make ice with, so you should be able to scare a few friends at the same time.

The Friday the 13th Jason Voorhees ice cube tray is available from $9.99, plus shipping. Depending on where you live, the shipping costs should only cost $4. Designed by ICUP Inc., the tray is available on the Big Bad Toy Store and should be enough to get a nice laugh anytime you have any friends over. It’s unclear if they’ll ever accept a drink from you afterward, though. It should still be worth the reaction you’ll get from them.