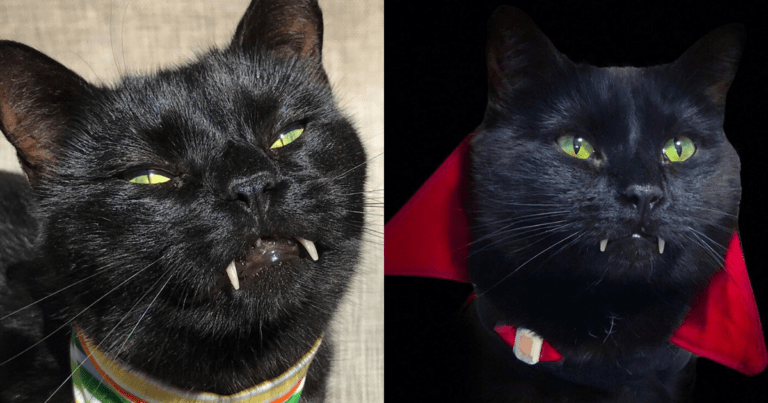 A few years back, Nicole Rienzie was just driving when a little black kitten surprisingly rushed to walk across in front of her car. Fortunately, she stepped on her vehicle breaks just in time before it reaches the cat.

Rienzie’s immediate response is to see if it was okay, but she was shocked to see the small feline in an unhealthy condition. When she recalled the first time she saw the kitten up close, it was “malnourished, very thin, covered in bugs, and the eyes were alarmingly infected.”

She brought the cat to her home, cleaned up, gave food, and named him Monkey because of his wild origins. They later shortened the name to Monk.

But as months go by, they noticed something strange growing in his teeth. Once Monk’s baby teeth evolved into a stronger set of adult teeth, his upper teeth have two long fangs. While cats innately grow fangs, Monk’s was long enough to resemble a vampire’s.

“He has these long teeth or fangs. He looks like a little vampire,” Rienzie said.

Monk’s fangs are measured to be three-quarters of an inch long, a striking big difference from that of an average cat. Most cats’ teeth grow as long as a centimeter long if they have no recession in their gums.

When Rienzie took Monk to an animal specialist, she was relieved when she learned that his condition was perfectly normal and shouldn’t be a cause of worry.

When Rienzie takes Monk outside, he was a popular sight among people because of his vampire-like fangs. She even started an Instagram account featuring cute photos of him at @monkandbean.

Here are some of Monk’s beautiful photos from his own Instagram:

What are your thoughts on Monk and his cute little vampire-like teeth? Share your reactions in the comments section below.