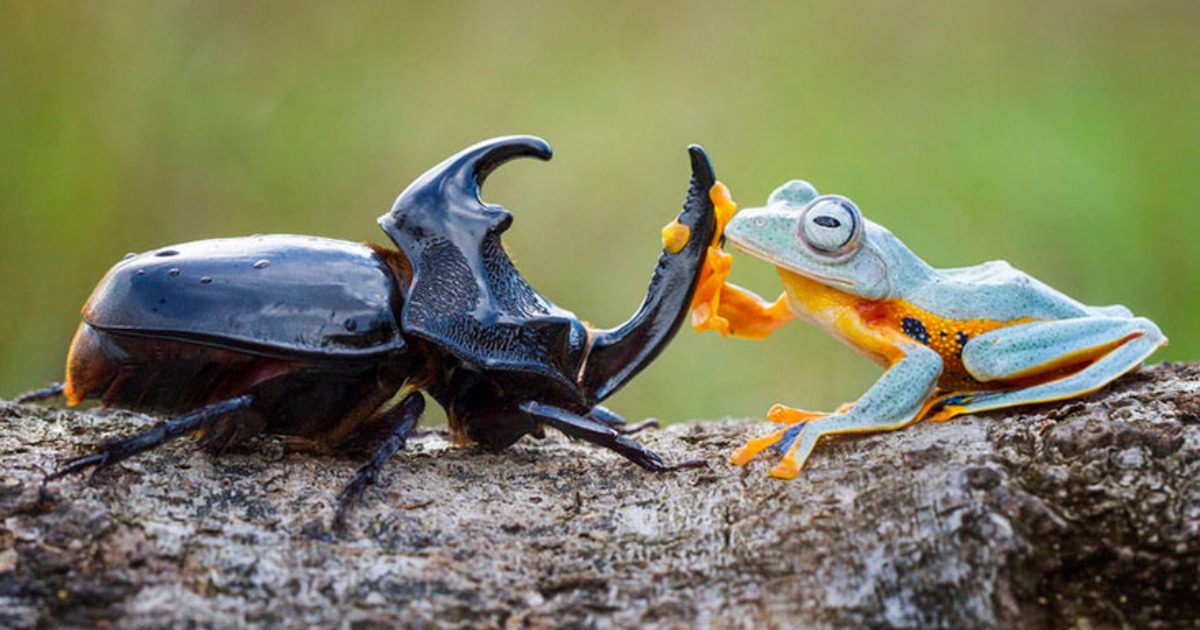 A photographer in Indonesia captured the moment of a lifetime – a tiny frog and giant beetle seemingly putting on a miniature rodeo show right in front of his eyes.

Wildlife photographer Hendy Mp stumbled upon this unlikely pair in Kalimantan Barat, Indonesia, a small town outside of his homestead in Sambas. Exhibiting some extraordinarily unusual behavior, the frog and beetle gave the photographer a spectacular performance that was fortunate enough to be captured in some incredibly rare and exciting photographs.

Nailing the rodeo-dance step by step, the vivacious critters spun themselves around do-si-do style before the frog jumped right onto the beetle’s back, almost looking like there should be a lasso in its tiny webbed hand.

The rodeo-riding frog is a Reinwardt’s Flying Frog, or Rhacophorus reinwardtii, a species of frog native to the wet and tropical typography of Indonesia, Malaysia, Thailand, China, and Vietnam.

The bucking-bronco beetle is a Rhinocerous Beetle, or Dynastinae, belonging to a family of giant beetles that includes the Hercules Beetle, the Unicorn Beetle, and the Elephant Beetle.

Specializing in macro-photography gave Hendy a huge advantage when it came to capturing this incredible moment. In a once in a lifetime photo-op, Hendy captures the hilarious and adorable exchange between these two very different species. Although it’s unsure what was actually going on, it almost seemed as if these animals were putting on a show, giving an exciting performance as the world’s tiniest rodeo.

Almost as quickly as the show began, it ended. (Thankfully, whatever this redo-inspired dance was, both animals left the interaction intact, unhurt, and unbothered.)

As a wildlife photographer, it pays to be in the right place at the right time. This rare spectacle is a fascinating reminder that Mother Nature is forever unpredictable and incalculable. Full of mystery and wonder, you never know what you’ll find if you look in the right places.